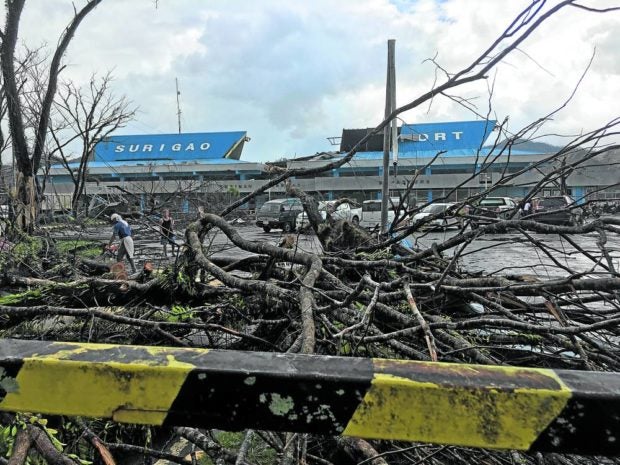 SIGNAL LOSS The Surigao Airport remains shut to commercial operations due to telecommunication signal loss, but is open to government, cargo and humanitarian flights. —GERMELINA LACORTE

After days without electricity and with food and water supplies either running low or already gone, residents in parts of the Visayas and Mindanao that were battered by Typhoon “Odette” (international name: Rai) have appealed for help as the death toll from the most powerful storm to hit the country this year continues to rise.

Surigao Bishop Antonieto Cabajog on Monday asked for food and water for victims in the city, saying he had never experienced such a destructive typhoon before.

“Blinding torrential rains and howling winds no man could take standing up hammered us for more than three hours” on the afternoon of Dec. 16, he said in a text message to the Catholic Bishops’ Conference of the Philippines.

“Not only were trees uprooted and rooftops ripped from homes battered like dollhouses, electric power and all forms of communication were cut off, literally isolating us from the rest of the world,” he added.

At Surigao National High School in Surigao City, where 7,233 people took refuge at the height of Odette, people waited for days for aid that never came, according to Allan Beniga, a security guard at the school.

“All people here need aid. First of all, we need water, but we also need food, rice, clothes, milk for the children,” he said.

Those who continued to stay at the evacuation site had nowhere else to go as they had lost their houses and belongings to rampaging floodwaters. One of them was Leonides Higamon, 42, who said he needed help or his family would go hungry.

“The typhoon destroyed our home, nothing was left, we don’t even have clothes to wear,” he added. “Those who went home still have something left. They decided to go or face hunger here because no help is coming.”

Mayor Ernesto Matugas Jr. said they did not expect the damage to the city to be so massive. He appealed for understanding from residents as the local government works “to restore essential services soonest” and asked for help from areas not affected by the typhoon.

Finance Secretary Carlos Dominguez III said the quick-disbursing loan extended by the World Bank to the country for postdisaster response could be used to rehabilitate provinces hit hard by Odette.

“Funding for rehabilitation after the typhoon is assured from the recently signed $500-million loan from the World Bank. Upon declaration of a state of national calamity, required funds will be immediately drawn,” he said.

According to Dominguez, he had been informed by Defense Secretary Delfin Lorenzana that the National Disaster Risk Reduction and Management Council (NDRRMC), after an emergency meeting on Monday, recommended the declaration of a state of calamity after the typhoon left scores dead and caused billions of pesos worth of damage in Visayas and Mindanao. Lorenzana is also NDRRMC chair.

Dominguez said the declaration of a state of calamity would also give the Department of Finance and Bureau of Internal Revenue legal basis to extend tax deadlines, a form of relief to affected taxpayers.

“Almost everything was destroyed, including the provincial capitol. Food supply is dwindling and there is nothing to buy throughout the province,” said Robredo who visited areas affected by the typhoon on Sunday.

A rapid damage assessment and needs analysis done by nongovernment group Balay Mindanaw and key Dinagat provincial officials, including Gov. Arlene “Kaka” Bag-ao, showed the massive devastation left by the storm, aside from the 15 deaths reported. Of some 22,000 houses in the entire province, about 20,000 were damaged, including Bag-ao’s.

Residents were badly in need of rice, potable water, medicine, and tarps and tents for temporary shelter.

Amid the scarcity of essential supplies, prices have gone up to exorbitant levels with vegetables being sold at P300 per kilo and diesel at P100 per liter.

In Puerto Princesa which is now under a state of calamity after most of the city was flattened by Odette, at least 7,000 families from 48 out of 66 villages are now staying in evacuation centers after their houses were destroyed, according to the social welfare office.

Long lines have formed around the two big supermarkets that remain open because they have their own power generators. But only those carrying cash were able to buy supplies since all online systems were down due to the lack of electricity.

Banks, however, were closed and no automated teller machines were operating.

In the Visayas region, the death toll has doubled overnight from 147 to over 200 as reports from local governments on casualties and damage to towns and cities have started to come in.

As of Monday, the fatalities due to the typhoon, the worst to hit the region since Supertyphoon “Yolanda” (international name: Haiyan) in 2013, have reached 262, including 72 in Bohol, 46 in Cebu province, 15 in Cebu City, 7 in Lapu-Lapu City, 8 in Mandaue City, 51 in Negros Oriental, 38 in Negros Occidental, 21 in Southern Leyte, 2 in Guimaras and one each in Iloilo City and Iloilo province.

At least 26 were reported missing in Negros Oriental.

The Philippine National Police, on the other hand, reported 375 deaths, mostly in Central Visayas, although the figures were still subject to continuing validation.

It also said that 56 persons were missing, 47 of them in Central Visayas, eight in Caraga and one in Eastern Visayas.

Lorenzana, as NDRRMC chair, assured typhoon victims that “everyone will be served in due time.”

“I have directed the Armed Forces of the Philippines to deploy all available assets to bring relief goods to the stricken areas. I have also directed the AFP to deploy more troops if necessary,” he said.