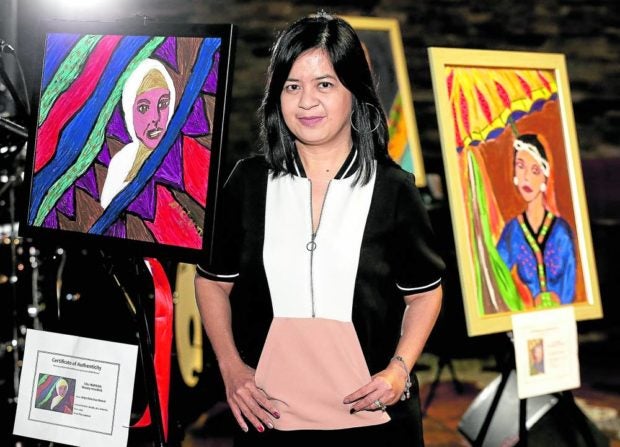 HER OTHER LOVE Arlyn dela Cruz, who turned to painting after recovering from a stroke in June 2019, is seen here in her first exhibit, titled “Hindi Ako Pintor,” in Makati City. —RICHARD A. REYES

Radyo Inquirer news director, journalist and film director Arlyn dela Cruz, who covered the kidnapping spree in 2000 onward and was herself taken hostage, died at a hospital on Monday morning after six years of battling colon cancer, her daughters said. She was 51.

In a Facebook post, her daughters Katrina Greta and Dominique said that even in the years following her diagnosis, their mother produced, wrote and directed several films and held two art exhibits, and “continued her relentless pursuit of the truth.”

“The disease did not conquer her zest for life and adventure; and she approached every new day armed with her razor-sharp wit and creativity,” they said.

Dela Cruz was a contributor for the Inquirer in the early 2000s before she became correspondent at large for the paper between 2009 and 2017.

In January 2002, Dela Cruz, a reporter for the local cable network Net 25, went missing in Basilan while apparently seeking access to American missionaries Martin and Gracia Burnham, then being held hostage by the Abu Sayyaf bandits.

After being held hostage for 98 days by what she described as former secessionist rebels who had been integrated into the military, Dela Cruz was freed on April 27, 2002.

“By the grace of God, I am finally home. This is an answered prayer,” she told reporters then.

In May 2015 Dela Cruz was appointed news director of Radyo Inquirer 990, where she anchored the morning show “Banner Story,” with station manager Jake Maderazo. She held the post until her death.

As a filmmaker, Dela Cruz was known for tackling political themes. Her debut film, “Maratabat (Pride and Honor),” which she produced and directed at age 44, recounts the massacre of journalists in southern Philippines.

An entry in the 2014 New Wave section of the Metro Manila Film Festival, “Maratabat” won the Award of Merit at The Indie Fest in California and the best international film at the People’s Film Festival in New York, both in 2016.

In her other films, she tackled the struggles of military men (“Mandirigma”), the life and times of a revolutionary (“Tibak”), story of Filipinos living with HIV (“Pusit”) and the war on illegal drugs (“Bubog”).

Dela Cruz was born on Jan. 4, 1970, in Cavite. She took up political science at the Virgen de los Remedios College in Subic, Zambales province. After graduating in 1990, she went to Manila and landed her first job as secretary in a forwarding company at the Port Area.

Her dream, however, was to be a journalist. She got her break as a reporter with dzBB under then radio newsman Rafael “Paeng” Yabut. She joined ABC 5 in 1992 before moving to ABS-CBN in 1994, and then back to ABC 5 in 1996. In February 2001, she joined Net 25, the television station of the Iglesia ni Cristo, as producer and newscaster. —With a report from Chona Yu