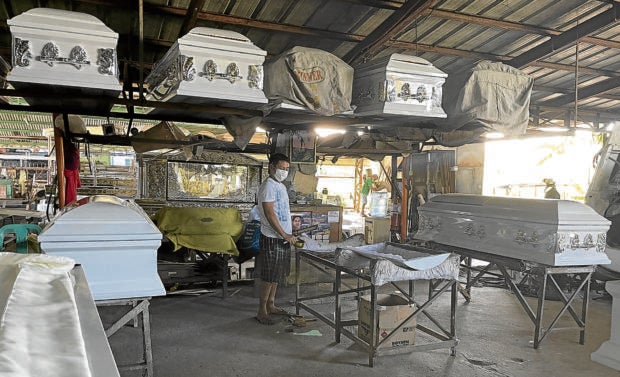 DEMAND UP Stocks at Dhansky Metal Caskets are few because COVID-19 deaths increased the demand for coffins made in Sto. Tomas, Batangas that the Department of Trade and Industry dubbed the casket capital of the Philippines. (File photo)

MANILA, Philippines — COVID-19 has cornered a tenth of the deaths registered in the Philippines and more than doubled year-on-year as of end-September.

The latest, preliminary Philippine Statistics Authority (PSA) data showed that from January to September, deaths due to COVID-19 and “virus-identified” deaths reached 34,361, climbing 468.7 percent from 6,042 a year ago.

The PSA data also included reported COVID-19 deaths but with “virus not identified,” which numbered 16,397, up 1.1 percent from 16,219 during the first nine months of last year.

National Statistician Dennis Mapa earlier explained that these deaths caused by unidentified COVID-19 had not been reported by the Department of Health (DOH) in its daily tally, as these cases have been unlikely tested for the disease.

When combined, the COVID-19 deaths with the deadly coronavirus identified and not identified in death certificates totaled 50,758 or 10.3 percent of the registered deaths in the Philippines as of September.

“Figures specifically for deaths due to COVID-19 may differ from [those] released by the DOH because the [PSA’s] figures were obtained from the certificates of death, particularly the descriptions written on the medical certificate portion therein as reviewed by the health officer of the local government unit concerned. On the other hand, the figures released by the DOH were obtained through a surveillance system,” the PSA explained.

The top three causes of deaths in the country which exceeded COVID-19’s death toll were ischaemic heart diseases, cerebrovascular diseases, and neoplasms or more popularly known as cancer, the PSA said.

End-September deaths caused by ischaemic heart diseases rose 18.7 percent year-on-year to 91,152, while those who died due to cerebrovascular diseases increased 3.6 percent to 49,063.

On the other hand, deaths attributed to cancers declined 14.7 percent year-on-year to 42,633.

While COVID-19 cases and deaths were on the rise, the PSA noted that “registered deaths attributed to pneumonia recorded a substantial decline, from 27,426 in January to September 2020 to 22,158 in the same period in 2021” or a 19.2-percent drop.

These data on causes of death came from submissions of city and municipal registrars nationwide which the PSA received as of Oct. 9, 2021.

The number and causes of deaths of Filipinos living or working overseas were not being captured by this quarterly PSA report.