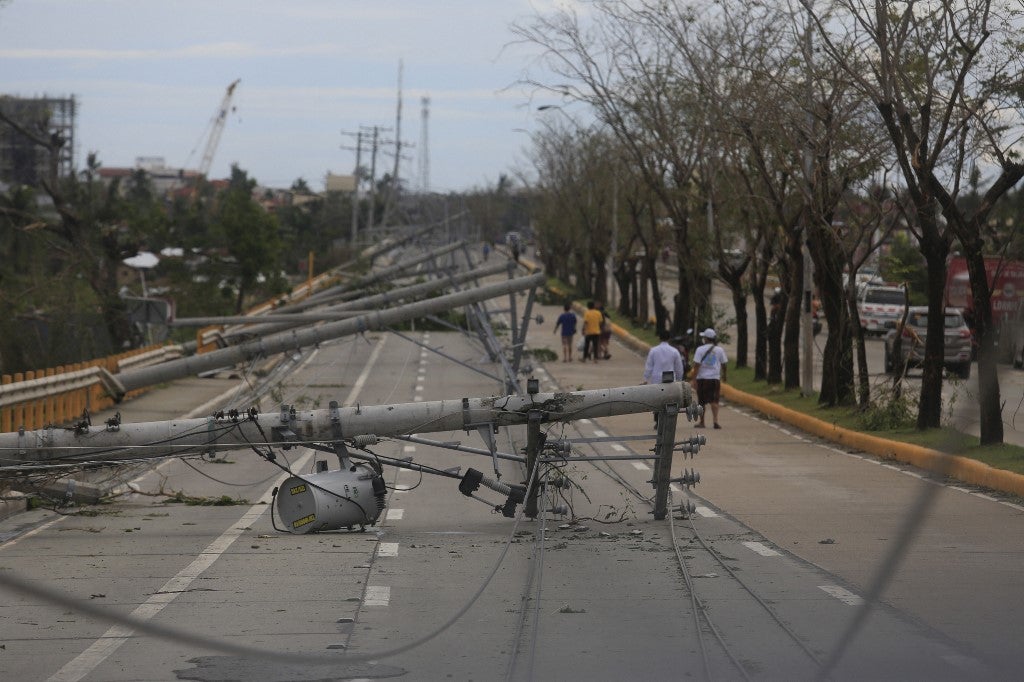 Residents walk past downed electric pylons in Talisay town, Cebu province on December 17, 2021, a day after Super Typhoon Rai pummelled the southern and central regions of the Philippines. (Photo by Alan TANGCAWAN / AFP)

So far, the Provincial Risk Reduction and Management Office received only two reported deaths in the province –both in the southern town of Argao, about 50 km from here.

But PDRRMO chief Neil Sanchez said they had yet to check and assess the situation in the 12 other towns in the south which remained inaccessible.

“The entire province is really affected. When you ask which towns are very affected, we could not yet say,” Sanchez told the Inquirer.

Sanchez said that access from Cebu City is only until Argao town when one traverses the east coast of the island.

Towns on the southwestern coast of Cebu were difficult to access due to the debris, including fallen trees and posts, he added.

The two towns next to Argao – Dalaguete, and Alcoy, were reportedly badly damaged by Odette but access to these municipalities was hampered by the debris that blocked the road.

A road was also damaged in Dalaguete, said Sanchez.

Making it more difficult was the absence of communication signals.

“There are some (municipal mayors) which we were able to get in touch. There are also some that we could not contact as of now,” Sanchez added. The PDRRMO has also tried to seek assistance from the town police stations under the Cebu Provincial Police Office but they too were having a hard time getting in touch with their chiefs of police.

Towns that were accessible were immediately given relief goods that included water and ready-to-eat food.

“We just have to be realistic. Communication is really a challenge here and access,” Sanchez said.

Communication towers from the PDRRMO to the different towns had been destroyed.

Sanchez said they were hoping that repairs on the tower would be done immediately so they could get in touch with their people on the ground.

The blackout in the entire province also contributed to the lack of communication signals. Odette’s strong winds downed some cell sites.