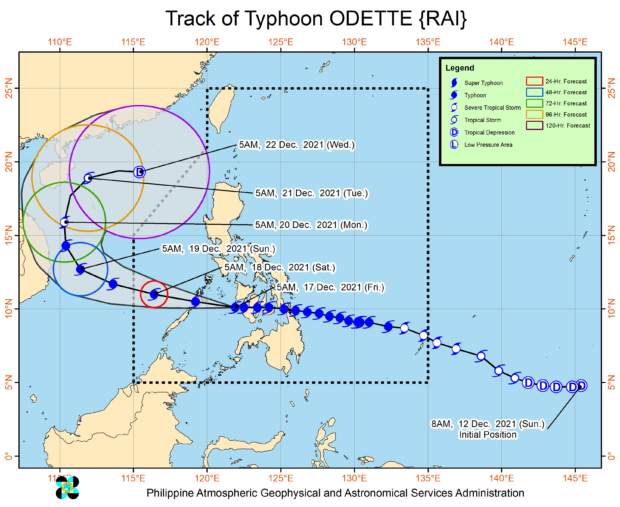 MANILA, Philippines — Typhoon Odette (international name: Rai) was crossing the Sulu Sea between Cuyo and Cagayancillo Islands on Friday morning and is expected to make another landfall in the vicinity of Palawan’s northern or central portion by afternoon.

This was the latest bulletin from the Philippine Atmospheric Geophysical and Astronomical Services Administration (Pagasa), which also said that at 7 a.m., Odette’s eye was seen 155 kilometers  (km) west-southwest of Iloilo City or 90 km south southeast of Cuyo, Palawan.

It added that Odette was moving westward at 15 kilometers per hour (kph), as it packed maximum sustained winds of 155 kph near the center and gustiness of up to 235 kph.

“Moving generally westward, the typhoon is forecast to make landfall in the vicinity of the northern or central portion of Palawan this morning or afternoon, re-emerge over the West Philippine Sea tonight, and pass in the vicinity of Kalayaan Islands tomorrow. The typhoon is forecast to exit the Philippine Area of Responsibility tomorrow morning or early afternoon,” Pagasa said in its 8 a.m. advisory Friday.

“Odette may still see some slight weakening until it crosses Palawan, but it is forecast to remain as a typhoon. Re-intensification is likely once Odette emerges over the West Philippine Sea. However, continuous weakening may ensue beginning Sunday as the typhoon becomes exposed to increasing vertical wind shear and the surge of the Northeast Monsoon,” the state weather bureau added.

On the other hand, areas below were placed under TCWS No. 2, where damaging gale to storm-force winds is prevailing or expected within 24 hours:

TCWS No. 1, meanwhile, were hoisted over the following areas, where strong winds are prevailing or are expected within 36 hours:

Pagasa likewise warned that heavy to torrential rains are likely to occur over Western Visayas, Palawan including Calamian, Cuyo, and Cagayancillo Islands, and Negros Oriental on Friday while moderate to heavy with at times intense rains are possible in Bicol Region, Zamboanga Peninsula, Quezon, and the rest of Mimaropa.

Further, it said light to moderate with at times heavy rains will prevail over the Metro Manila, Cagayan Valley, Cordillera Administrative Region, Caraga, Northern Mindanao, Aurora, Lanao del Sur, and the rest of Visayas on Friday.