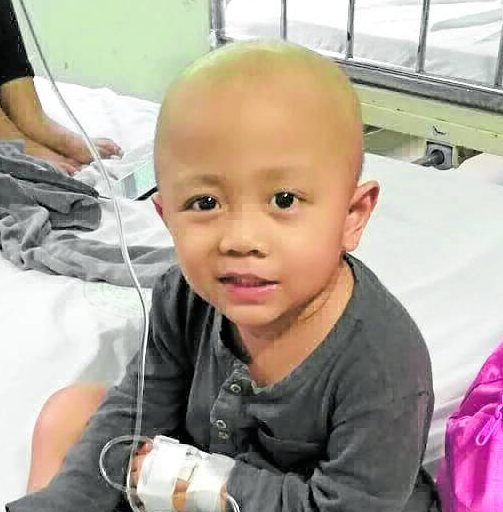 There’s only one gift 4-year-old Dwayne Lawrence Soriano wants this Christmas: to be cured of acute lymphocytic leukemia.

“It’s what he prays for every night before we go to bed,” his mother, Maricel, told the Inquirer. “He says he wants to be better so that he will no longer have to go to the hospital or take his medication every day.”

Every month, Soriano must go to the Jose B. Lingad Memorial Hospital in San Fernando, Pampanga, to undergo chemotherapy for his illness. The family lives in the nearby town of Mexico.

“He dreads these visits because he knows he will feel pain. When they stick him with needles, he cries but he eventually quiets down,” Maricel said.

In January 2019, she had just started working in Hong Kong when her husband called her up.

“He said Lawrence was having recurrent fevers and had turned pale. They thought it was just measles but he also complained of bone pain and found it hard to walk. Then his stomach became bloated, the nodules in his neck swelled up and he developed contusions (pasa),” said Maricel who quit her job and immediately flew home to be with her son.

Two years later, Maricel said her son is now in remission although he continues to undergo chemotherapy monthly. The government shoulders the costs for the procedure and medicines but the family spends P2,000 on the laboratory tests required before treatment.

On top of this, Soriano needs to take his maintenance medication every day composed of methotrexate, mercaptopurine and dexamethasone. The three medicines cost P90.

Maricel’s husband, Luicel, does not have a regular job while she is a full-time mother to Soriano and their other child. The couple would appreciate any donation so that their son could continue seeking treatment for his illness.