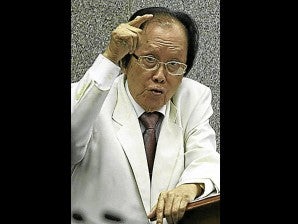 A senator-judge on Monday stood up to question the lead defense counsel, Serafin Cuevas, for his insistence on cross-examining a cameraman of ABS-CBN regarding the temporary restraining order (TRO) issued by the Supreme Court that would have allowed former President Gloria Macapagal-Arroyo to leave the country last November.

Pimentel told Cuevas, a former associate justice and justice secretary, that a lot of law students were watching the proceedings and were excited to learn.

“I hope they learn the correct law,” Cuevas retorted.

Pimentel said that Cuevas was asking cameraman Edmond Losalla to confirm details about the TRO when Losalla submitted raw footage of a press conference of Supreme Court spokesperson Midas Marquez and of two ambush interviews of Arroyo’s lawyer, Ferdinand Topacio.

Prosecutors submitted Losalla’s footage as part of evidence for Article 7 of the impeachment complaint accusing Chief Justice Renato Corona of “partiality” when the Supreme Court granted the TRO petition of Arroyo, now a Pampanga representative, and husband Jose Miguel.

“The witness had nothing to do with the documents. Is (your line of questioning) the correct procedure?” Pimentel repeated.

“Very correct,” Cuevas said. “Because how can documents be referred to later, your honor? If they will not be marked, they will be useless pieces of paper.”

“Even if the witness did not identify the document or had no part in the document? Should you not have (the TRO copy) marked at the time you are presenting your case through your own witnesses,” Pimentel shot back.

The senator noted that the cross-examination of Losalla was “probably the fifth time you have a document marked without the witness not having been part of the document.”

“The witness cannot authenticate the TRO. He is incompetent to answer questions from the defense. He’s just here to authenticate what he recorded on video,” Estrada said.

Unperturbed, Senate President Juan Ponce Enrile reminded his colleagues that “a lot of leeway is given during a cross-examination. I allowed the questions because I understand the (TRO) is being used by the cross-examiner to confront the witness.”

In a posttrial interview, Senator Antonio Trillanes IV described Cuevas’ line of questioning as “off” but conceded that part of the defense panel’s job was “to show that the particular witness did not have personal knowledge on the substance of… the TRO.”