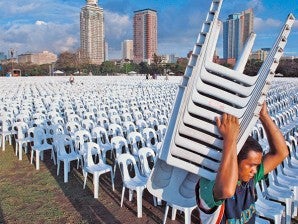 Watch out for riddles when Iglesia ni Cristo (INC) gathers its flock at Quirino Grandstand in Manila Tuesday.

Billed as a purely “religious activity,” the expected massive INC gathering is taking place on the 25th day of the impeachment trial of embattled Chief Justice Renato Corona, raising questions from a key figure of the Roman Catholic Church in the Philippines.

Retired Archbishop Oscar Cruz said he was invited to attend the INC grand prayer rally—expected to officially start at 5 p.m.—but that he declined because he did not want his actions to be misinterpreted owing to what he said was the still unclear nature of the event.

“Many people might misinterpret my presence there since it is also not yet clear if the occasion will really be a Bible exposition or there is sociopolitical significance to it,” Cruz said in a phone interview.

INC said in a statement that Tuesday’s assembly was  part of the group’s campaign for “the intensive propagation of God’s words, led by INC’s executive minister Eduardo Manalo.”

But an INC insider indicated the affair would be more than just a  “Grand Evangelical Mission”—he said it was also meant to serve as a message to President Aquino and his allies that INC was  “not happy” with how Mr. Aquino had been running the government.

“It seems Malacañang is not getting the message of the church. This is just another way to show our displeasure,” the source told the Philippine Daily Inquirer.

He said  the affair was also intended to protest the “attacks” against certain prominent INC members.

The insider asked not to be identified, saying he had no authority to speak to the media about Tuesday’s event.

‘We speak in riddles’

According to the insider, the INC hierarchy was particularly offended by how the Aquino administration treated the case against former National Bureau of Investigation Director Magtanggol Gatdula, an INC member, who was sacked  from his post for supposed involvement in the abduction of an undocumented Japanese woman. Gatdula has denied the allegation.

The source said INC officials were also piqued by Malacañang’s supposed attempt to pressure retired Supreme Court Associate Justice Serafin Cuevas—also an INC member—to withdraw as Corona’s lead counsel in the impeachment trial.  The Palace has denied any such effort.

Asked how the gathering would send its message to the President, the source said: “We speak in riddles. It’s up to those concerned to read between the lines.”

“The church feels the Aquino administration has given too much focus in its efforts to pin down Corona, which took away the much needed attention to the more serious problems of poverty, unemployment and failing economy,” he said.

“We only pray for the rule of law to be respected.”

The source said INC initially tried to “send its message” to Malacañang by getting former Justice Secretary Artemio Toquero, a church member, to serve as counsel of former President and now Pampanga Representative Gloria Macapagal-Arroyo in the criminal cases against her in the justice department.

“But still, Malacañang did not get the message,” the insider said. “(Malacañang) still cannot see the displeasure of the INC over recent events in our country. We hope they see it this time.”

He said several politicians were invited to attend today’s affair but  they would be “reminded” not to issue political statements.

Asked if Corona was asked to come, he said: “We will not prevent anyone from going there. Everybody is welcome to join.”

The Manila Police District (MPD) spokesperson, Chief Inspector Ervin Margarejo, told the Inquirer he expected at least 100,000 people to take part in the rally. He said the figure could increase up to 500,000.

Cruz, a former president of the Catholic Bishops’ Conference of the Philippines (CBCP), said he turned down an invitation to attend Tuesday’s rally and that he believed the more suitable Church figure to attend was Novaliches Bishop Antonio Tobias, who chairs the CBCP Commission on Ecumenical Affairs.

Asked if he had information that the event was going to be a stage to drum up support for Corona, Cruz replied: “It’s up to INC if they want that to happen but they said it’s not going to be a political activity. That’s what Malacañang also said, so let’s see what happens.”

“But this is a very singular event of this magnitude … I think they have hired trucks from various provinces to bring their members for the Bible exposition,”  Cruz said.

Before Corona’s impeachment trial began last month, Cruz visited the Chief Justice and gave him his blessings.  He earlier said he had no choice but to support Corona because the judiciary was under attack.

With a membership of 1.8 million (according to a 2000 government census), INC carries a political clout, its members supposedly voting in bloc and their support courted by politicians during elections.

A check of the Inquirer Archives did not show it has had a major gathering at Manila’s Rizal Park in recent years.

Malacañang was confident the INC assembly would stay away from politics.

He said the Palace had “no worries” that the group would turn the affair into a political rally “because that is what they also told us—that it’s going to be a grand evangelical mission.”

President Aquino earlier dismissed reports that Tuesday’s gathering  would openly support Corona in his bid to survive the impeachment trial.

Mr. Aquino said he was assured by Palace executives who had spoken to INC officials that the event would merely be a religious activity.

Bienvenido Santiago, INC spokesperson, said similar Bible exposition assemblies would be held by INC in 18 other venues around the country.

Members from five ecclesiastical districts in Metro Manila and from Bulacan and Calabarzon are expected to attend the Manila event, he said.

The MPD announced the closure starting noon Tuesday of at least three roads to give way to the INC affair and said at least 500 personnel would be deployed to ensure the safety of participants.

According to the traffic advisory, the  whole stretch of Katigbak Drive, South Drive and Independence Road will be closed to vehicular traffic at noon.

Motorists are advised to take Quirino Avenue if they plan to go to the Nagtahan, Jones, MacArthur and Quezon bridges or if they are bound for Taft Avenue. With reports from Christine Avendaño and  Jeannette Andrade