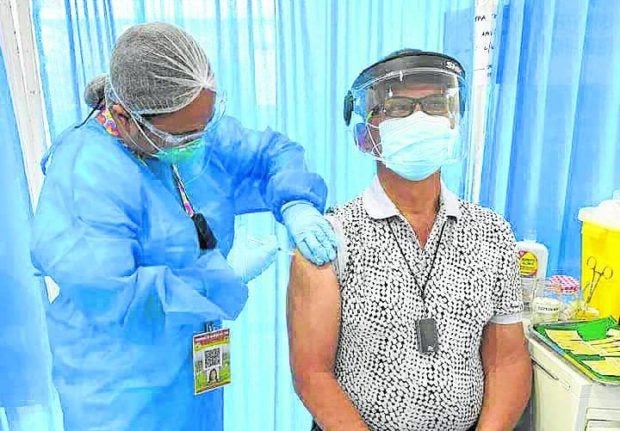 SETTING EXAMPLE In this photo taken in April, Agusan del Sur Gov. Santiago Cane Jr. takes his vaccine shot at DO Plaza Memorial Hospital in Prosperidad town to set an example to his constituents about the importance of getting protection from COVID-19. —CONTRIBUTED PHOTO.

While Davao City Mayor Sara Duterte warned contractual government employees their contracts would not be renewed if they refused to be vaccinated, Agusan del Sur Gov. Santiago Cane Jr. said the province would require negative results of reverse transcription-polymerase chain reaction (RT-PCR) test from unvaccinated workers at the provincial capitol.

Cane said workers who refused to get vaccinated would have to shoulder the RT-PCR costs from their own pockets and they would not be allowed to report to work without the document. He issued the memorandum on Dec. 12 after learning that 66 provincial government workers had yet to get their vaccine shots.

Of the unvaccinated workers, 38 are with the Provincial General Services Office while 12 are under the governor’s office. The provincial government employs 2,667 workers.

Cane also told department heads at the provincial capitol to advise their employees to get fully vaccinated to protect themselves and their families, especially as the provincial government would be back to its normal operation. But the governor said the concerned workers would be given the chance to explain why they still had yet to get vaccinated.

Chrisan Perez, information officer of the Provincial Health Office, said there used to be more than 100 capitol workers who remained unvaccinated but some eventually took the vaccine shots after learning about the stringent measures imposed by local governments in other areas.

ReasonsPerez said some workers did not get vaccinated because of their health condition, fear or due to restrictions imposed by their religious congregations.

In the memorandum, capitol workers with medical conditions are told to present their medical certificates issued by authorized health personnel as valid proof why they should not be vaccinated.

Absences due to failure to submit proof of vaccination and negative RT-PCR results will be automatically charged to the workers’ remaining leave credits. In cases where leave credits had been used, the provincial government would apply the “no work, no pay” policy.