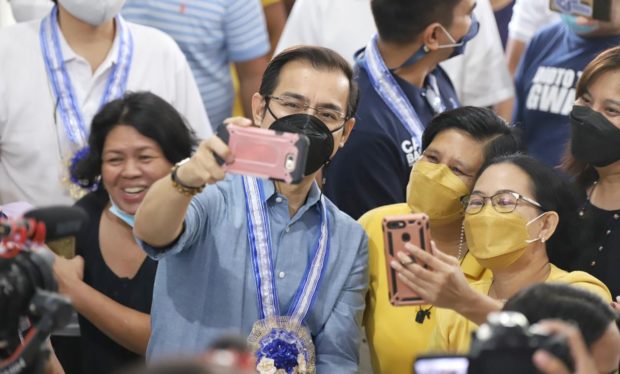 San Joaquin town is the birthplace of Moreno’s father, Joaquin, who in his youth went to Hamtic, Antique, and later on, tried his luck in Manila in the 1960s and worked as a stevedore in the ports of Manila.

In the slums of Tondo in Manila City, Joaquin Domagoso would later meet and fall in love with Rosario “Chayong” Moreno, a native of Allen, Northern Samar. Chayong would bore Joaquin a son who they named Francisco Moreno Domagoso.

Moreno said he is very happy that after spending all his life in Tondo thinking he is all alone as a Domagoso, he has now actually touched base with his humble roots. The Sandoys are the offsprings of his father’s sister who remained in San Joaquin.

The Aksyon Demokratiko standard-bearer said he is also happy that he was able to prove to the whole world that everything he said about his humble beginnings was true.

Moreno said he is proud to be a Domagoso because it was from his father that he learned the value of hard work, persistence, and uprightness, qualities that have brought him success in his life, both as a fledgling actor and later on as councilor, vice mayor, and now mayor of the country’s capital city.

He recounted how his father always went to the pier to look for work even if he is not on duty, always hoping that he will be noticed and given work so he can provide for his family.

Moreno said the same could be said about his mother, who taught him the value of discipline in his early life in the slums.

The 47-year-old presidential aspirant said his family’s life story should serve as an inspiration to ordinary folks like the people of San Joaquin.

Having said that, Moreno asked for the support of his relatives and the people of San Joaquin in his journey to the presidency, where he is pitted against what he called “mga anak ng pinagpala.”

Moreno said the success of his quest, as well as the respective bids of his running mate, Dr. Willie Ong, as well as his senatorial candidates, Dr. Carl Balita, Samira Gutoc, and Jopet Sison, lies not on gold and billions in wealth as their opponents supposedly have, but on the single peso that they can give to their candidacies by texting their close friends and relatives.

In this way, he said people can proudly say that, if he is elected, they were the cause of his success because of the single peso they invested in him, an investment they could later ask to be recompensated with.

Moreno vowed that the people’s single-peso investment would be returned in the form of public housing, public hospitals, schools, jobs, and other basic services through his “Buhay at Kabuhayan” agenda of governance.