After hours trapped in ruin of tornado-hit factory, worker is 'happy to be alive' | Inquirer News

After hours trapped in ruin of tornado-hit factory, worker is ‘happy to be alive’ 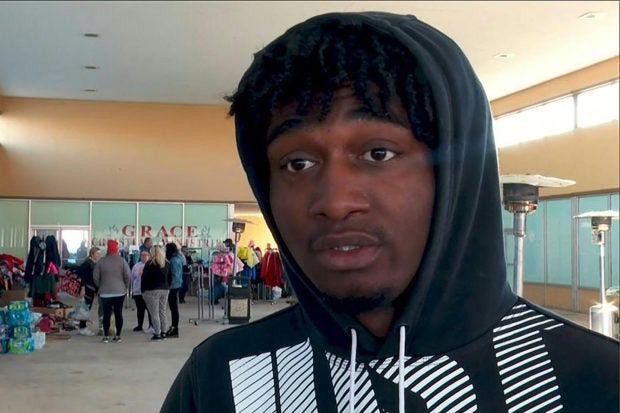 In this framegrab from an AFP video, Jemaryon Hart, 21, speaks with AFP after surviving a tornado that destroyed his workplace in Mayfield, Kentucky on December 13, 2021. AFP

MAYFIELD, United States–Jemaryon Hart is bruised but grateful just to be alive after seven hours trapped under the rubble of a candle factory in Mayfield, a town devastated by the deadly tornado that swept across the state of Kentucky last Friday.

“I’m happy I’m alive,” said the 21-year-old, who had been working for 10 days at the candle factory on the western side of the small town.

The factory looks like it has been stamped on by a giant’s foot, nothing more than a heap of sheet metal, steel and wood that rescuers were methodically clearing in the ever-shrinking hopes of finding survivors.

On Friday night, “it was a normal day at work and it just kind of all happened at one time,” Hart said. “Once we heard sirens, everybody tried to get to the safety area. But at that point it was just like it kind of all happened, and there was no way of bracing for it or anything like that.”

As the tornado slammed into the building, the roof collapsed, trapping the workers inside.

“It was really scary, really painful, the walls, cinder blocks, metal, wood, everything just crushing you,” he said. “The more we waited, the building like, settled in more and more on top of us.”

“You went from being able to wiggle just a little bit at the beginning to not being able to move at all, everything just pinning you down,” he said.

“I was just trying to control my breathing. A lot of people weren’t able to do that, people were panicking,” he told AFP. Some of the people passed out. Others were crushed to death.

The young man still managed to get his phone out of his pocket to call his pregnant girlfriend and then his mother.

“It gave me a little more hope to try to stick through it. Wait for help” that finally came after seven long hours, at 3:40 am.

The first rescuers, who arrived almost an hour after the tornado struck, took a long time to clear the debris, fearful that any false move could lead to the people trapped underneath being crushed to death.

Once he had been freed, Hart was carried to safety by firefighters because he could no longer feel his left leg.

“Just seeing my place of work just completely not there anymore… It was so unbelievable. The parking lot was gone. The building was gone. All the cars were gone,” he said.

Beyond the physical pain, Hart also feels psychologically bruised. He discovered that a young coworker he knew was dead, and he suffers flashbacks every time he talks about the factory.

“It was so crazy. It’s not actually believable that it happened. But you being there and the thoughts and images going through your head, you know it happened. So it’s just kind of hard to cope with everything,” he said.

He is angry at the lack of safety measures put in place by the factory management, who had decided to continue production despite warnings from the authorities. Asked if he was considering suing his employer, Hart said, “That’s what they deserve.”