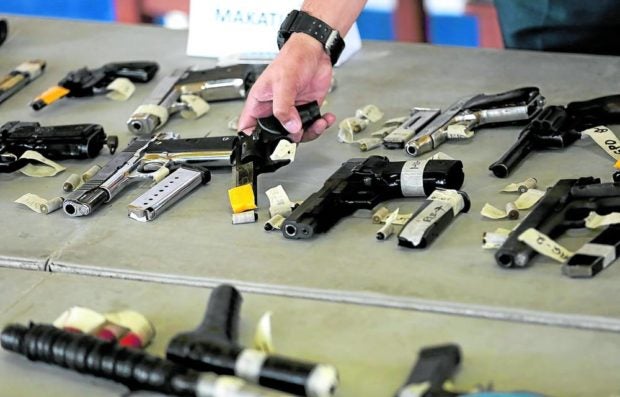 AVERTING ELECTION VIOLENCE: This photo, which was taken during the election period in 2019, shows several firearms seized during operations and checkpoint inspections by the Southern Police District in Metro Manila. For the presidential and national elections next year, Philippine National Police chief Gen. Dionardo Carlos says more than 500 “hot spots” around the country are being watched to prevent violence that may erupt among rival candidates and their supporters. —(Photo by RICHARD A. REYES / Philippine Daily Inquirer)

MANILA, Philippines — The Philippine National Police has identified 546 election “hot spots” ahead of next year’s polls, down from 946 in the 2019 elections.

Of the 488 towns and 58 cities tagged by the PNP during a press briefing on Monday, most were under the Bangsamoro Autonomous Region in Muslim Mindanao while others were in Cagayan Valley, Central Luzon, Bicol and Western Visayas.

Of the 546 hot spots, only 39 towns (3 percent out of the country’s 1,438 towns) and seven cities (5 percent out of 146 cities) were under the red category or considered areas of grave concern, according to PNP acting director for intelligence Police Brig. Gen. Michael John Dubria.

Dubria did not identify the election hot spots, saying only that these were still “subject [to] validation” as the figures were based only on PNP records.

PNP chief Gen. Dionardo Carlos, who was also at the briefing, said that the data would be validated during their meeting on Tuesday with other agencies like the Armed Forces of the Philippines and Philippine Coast Guard.

He added that the PNP would maximize the deployment of policemen to the election hot spots. 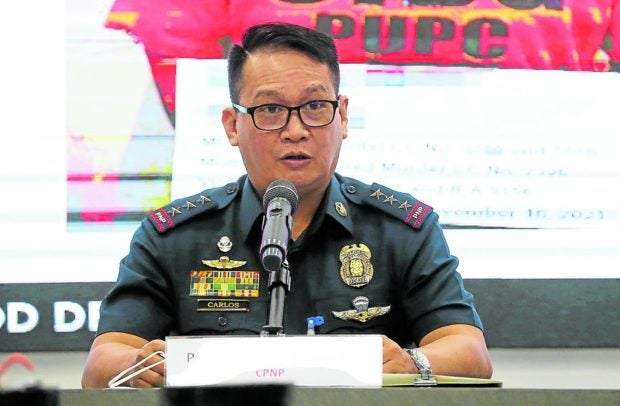 Next to areas in the red category, there are also orange (areas of immediate concern) and yellow hot spots (areas of concern).

Orange areas refer to those where there are serious armed threats by some groups. On the other hand, yellow areas have either a history of election-related incidents in the last two elections or of intense political rivalry, or were previously placed under the control of the Commission on Elections.

Red areas — considered the highest category of hot spots that require increased security deployment — have both the characteristics of those under the yellow and orange categories.

The Philippines has a long history of polls marked by violence and bloodshed.

During the election period between January and June 2019, there were 60 violent incidents although the figure was lower than the 133 recorded during the same months in 2016.

After the filing of certificates of candidacy for next year’s elections in October, then PNP chief Gen. Guillermo Eleazar ordered all unit commanders to start mapping out security plans in their respective areas as intense political rivalries were expected to heat up at the local level.

But even a month before, a grenade was thrown at the ancestral home of Cagayan de Oro Rep. Rufus Rodriguez while a town councilor in Zamboanga del Norte province was killed in an ambush. A vice mayoral bet in Datu Saudi Ampatuan town also narrowly escaped a gun attack.

On Nov. 18, a municipal elections officer in Northern Samar was shot and killed by a still-unknown assailant.

Earlier this month, the PNP said that it was carefully watching six private armed groups that could pose a threat to next year’s elections and 138 others that could be activated to instigate violence.

As in previous polls, Carlos said in Monday’s briefing that the permit to carry firearms would be suspended during the election period.

“The ban on firearms will be [from] Jan. 9 to June 8, 2022, so definitely what is suspended is the privilege of permit to carry,” he said.

“However, the PNP will not stop processing requests to be given that privilege, but the effectivity will not be during the period of election,” Carlos clarified.

He added that the PNP would also continue to process applications for gun licenses.