Russian teenager ‘blows himself up’ at Orthodox school; 10 kids hurt 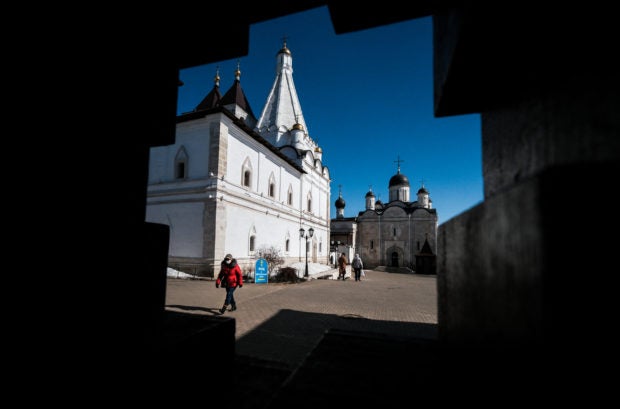 In this file photo taken on March 24, 2021, a woman wearing a face mask to protect against the coronavirus disease crosses the yard of the Vladychny Vvedensky Russian Orthodox convent founded in 1360 in the town of Serpukhov, some 95 km outside Moscow. – An 18-year-old graduate of an Orthodox school “blew himself up” at a convent outside Moscow, injuring himself and at least one minor, the interior ministry said on December 13, 2021. (Photo by Yuri KADOBNOV / AFP)

Serpukhov, Russia — A Russian teenager tried to blow himself up at an Orthodox school in a 14th-century convent outside Moscow on Monday, wounding 10 children.

The attacker, an 18-year-old former student of the school, survived. He was taken into intensive care and had his leg amputated after suffering injuries, authorities said.

“The person who tried to commit suicide is in intensive care,” a representative of the Investigative Committee, Olga Vradiy, told journalists.

Police and ambulances lined the red-colored medieval walls of the convent, founded in 1360.

Russia has seen a rise in attacks on schools in recent years but incidents at religious premises are rare.

The interior ministry said the teenager entered “the Orthodox gymnasium next to the Vvedenskiy Vladychniy convent and blew himself up.”

The convent is in the city of Serpukhov, 100 kilometers (60 miles) south of Moscow.

“One teenager was hospitalized. The rest of the children are in hospitals in the Moscow region,” she said on Telegram.

“There is no threat to their lives”.

The Investigative Committee, which probes major crimes, said it opened a criminal case into attempted murder and the illegal handling of explosives.

Denis Ryabov, a pupil at the school, said he was praying with his classmates when the incident took place.

“I smelt burning, the teacher said there had been an explosion,” he said as he left the convent accompanied by his mother.

“A door was blown off. Some children were crying.”

The school has pupils from ages 7 to 16.

State news agency TASS, citing a police source, said that the teenager wanted the device to go off during morning prayers, but it detonated at the entrance to the school.

Authorities said they were working to establish the motives behind the attack.

The Interfax news agency said the teenager could have wanted to take revenge for being bullied by nuns in the convent.

Vladimir Legoida, a Russian Orthodox Church spokesman, said the church will provide assistance to “all those affected.”

“Wherever such attacks take place, they cause the same grief and desire to prevent this from happening in the future,” he said in a statement on messaging app Telegram.

Since President Vladimir Putin first came to power in 2000, the Russian church has extended its clout on traditionally secular institutions such as schools, with lessons on religion and clerics lobbying for conservative textbooks.

In September, a student killed six people and wounded dozens on a university campus in the Urals city of Perm.

In May, a 19-year-old opened fire in his old school in the central city of Kazan, killing nine people.

In October 2018, another teenage gunman killed 20 people at a Kerch technical college in Crimea, the peninsula Russia annexed from Ukraine in 2014.

He was shown in a camera footage wearing a similar T-shirt to Eric Harris, one of the killers in the 1999 Columbine High School shooting in the US, which left 13 people dead.

The attacks have led some in Russia to call for stricter gun control in the country and for reinforced security in schools.