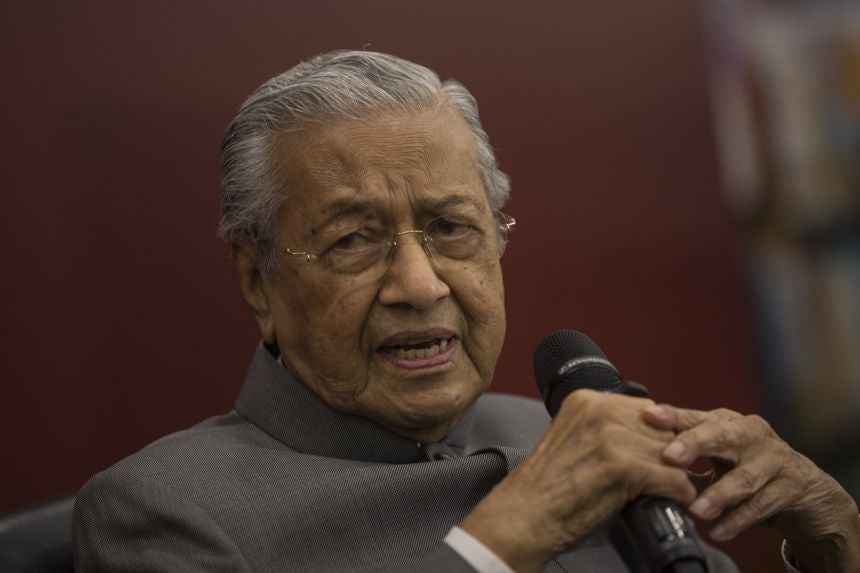 KUALA LUMPUR — Former Malaysian prime minister Mahathir Mohamad said on Sunday (Dec 12) that the next general election will be the “last chance to clean up the country,” as he accused the current government, led by his erstwhile party Umno, of being corrupt.

“I still feel the need to bring down this government because this government is a corrupt government. It did not come into power through elections,” Tun Dr Mahathir told a news conference at the launch of his latest memoir titled Capturing Hope: The Struggle Continues For A New Malaysia.

Malaysia’s next national poll is not due until 2023, but the 96-year-old political grandee expects it to be held as soon as the middle of next year.

Umno’s uninterrupted six-decade rule ended in the 2018 general election, after it was defeated by the Pakatan Harapan (PH) pact led by Dr Mahathir. But the party returned as part of the ruling alliance Perikatan Nasional in March 2020, after defections led to PH’s collapse. In August, Umno vice-president Ismail Sabri Yaakob became prime minister, replacing Tan Sri Muhyiddin Yassin who had lost the support of 15 Umno MPs.

Dr Mahathir alleged that if the next elected government is formed of corrupt politicians, that will be the end of the fight against corruption “because the corrupt government will ensure that through corruption, they will stay in power”.
“So the next election is going to be a very important election in Malaysia. It is the last chance that we have to clean up this country. If you don’t, then forever you’re going to have bad government,” he said.

Dr Mahathir’s book covers the events leading to the rise of the Pakatan Harapan government which he helmed from May 2018, the challenges which the administration faced, and its downfall in March 2020.

Critics contend that Umno would not have returned to the driving seat if Dr Mahathir had handed over the reins of the Pakatan Harapan government to Parti Keadilan Rakyat president Anwar Ibrahim, as agreed by the coalition.

Instead, he resigned as prime minister in February 2020, and attempted to form and lead a “unity government” comprising parties from both sides of the aisle. The move failed.

In his book Dr Mahathir defended his shock resignation following the departure of his party, Parti Pribumi Bersatu Malaysia from Pakatan Harapan. The pull-out, led by his former ally Muhyiddin who eventually succeeded him as prime minister, caused PH to lose its majority in Parliament.

“The Pakatan Harapan government had effectively been overthrown… I could not continue to be prime minister anyway regardless of whether I resigned as prime minister or not,” wrote Dr Mahathir.

The veteran statesman, whose election campaign in 2018 centred on the billions misappropriated from state fund 1MDB and former prime minister Najib Razak’s alleged role in the scandal, warned that Najib could return as leader if Malaysians fail to vote due to political fatigue.

Najib has been convicted of graft linked to 1MDB but remains out of prison pending his appeal to the Federal Court.

“In the case of Najib, he is found guilty by a court of law. But he is treated not as a convict who has been convicted but as a free man. He can go to Parliament and make speeches, he can campaign, now he can even go outside the country,” he said.

Najib continues to be a member of Parliament but he cannot contest in an election for as long as the conviction stands. If he fails to overturn his conviction, his only recourse would be to obtain a pardon from the King.

In his book, Dr Mahathir takes a swipe at claims that US$700 million (S$955 million) that had been banked into Najib’s personal bank account had come from Saudi donors, and not the now-defunct 1MDB state fund.

“These ‘explanations’ did not make sense. Surely no one could believe that such a huge sum was a mere ‘donation’,” wrote Dr Mahathir, asserting that he could not raise “a single dollar” from Arab donors to contribute to the establishment of the International Islamic University Malaysia or to the Oxford Center for Islamic Studies in Britain.

Mahathir and Duterte: a world of contrasts

Read Next
Robredo clarifies: I’m still against NTF-Elcac’s move of red-tagging
EDITORS' PICK
Lawmakers eyeing more changes in Maharlika plan
How not to retire as an ex-president
Hidilyn Diaz wins only gold missing from her collection
Shop smarter with vivo’s big 12.12 holiday deals
The vivo Y02 is now available in the Philippines for only PHP 5,299
House energy committee chair Arroyo bats for cheap electricity
MOST READ
Don't miss out on the latest news and information.