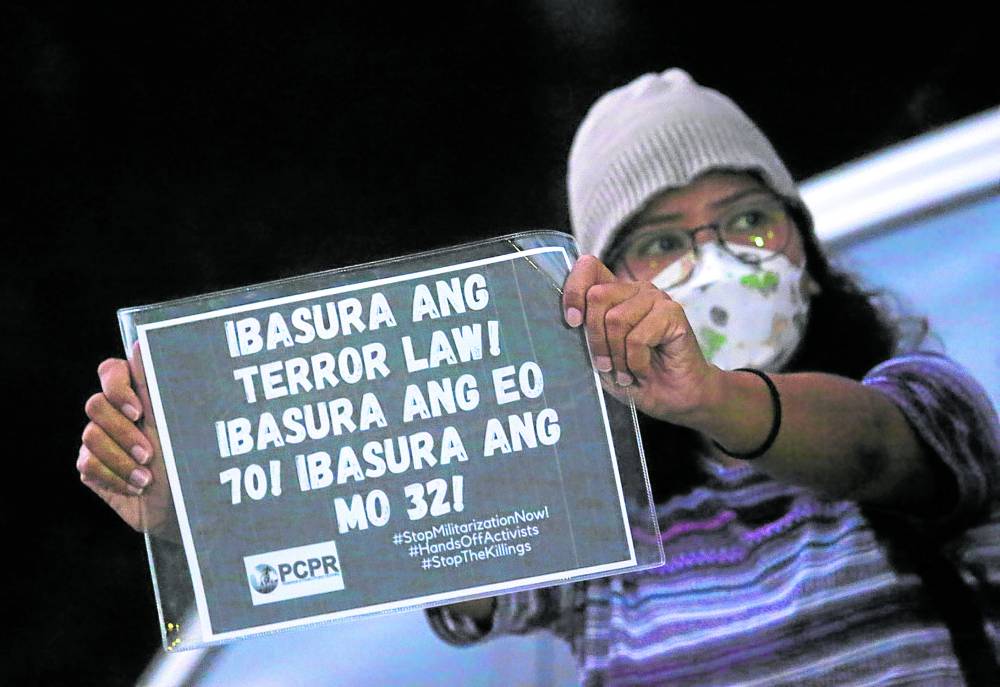 ‘THROW IT ALL OUT’ Militant groups gather outside the Commission on Human Rights main office in Quezon City on Dec. 7 while waiting for the Supreme Court ruling on the constitutionality of the antiterror law. —LYN RILLON

Groups that opposed the Anti-Terrorism Act said on Thursday that they plan to ask the Supreme Court to reconsider its decision declaring only two provisions of the controversial law as unconstitutional and to strike down other parts that they said would curtail civil and political rights.

The court’s decision on 37 petitions questioning Republic Act No. 11479 was reached on Tuesday and announced on Thursday more than a year after it took effect on July 18, 2020.

“On the basis of the current petitions, all the other challenged provisions of RA 11479 are not unconstitutional,” the Supreme Court said.

The petitioners who questioned the law said several “dangerous” provisions remained, including one that would allow state security forces to detain a terror suspect for up to 24 days without charges or court order.

The 15-member court did not release a copy of its ruling along with the announcement of its decision. The court’s public information office said the main decision and separate opinions of the justices explaining their votes would follow.

Various groups and prominent individuals said the antiterror law undermined judicial authority and fundamental rights under the 1987 Constitution, and may be used to stifle legitimate dissent.

Voting 12-3, the justices struck down a provision in Section 4 on the definition of acts of terrorism that the petitioners said could include legitimate expressions of dissent.

Section 4 said that terrorism “shall not include advocacy, protest, dissent, stoppage of work, industrial or mass action, and other similar exercises of civil and political rights, which are not intended to cause death or serious physical harm to a person, to endanger a person’s life, or to create a serious risk to public safety.”

The court said the “qualifier,” referring to the unproven intention of causing death or serious harm, was unconstitutional “for being overbroad and violative of freedom of expression.”

By a 9-6 vote, the justices also declared unconstitutional a provision in Section 25 that allowed the Cabinet’s Anti-Terrorism Council (ATC) to automatically adopt terrorist designations made by foreign governments or entities like the United Nations Security Council.

Acting presidential spokesperson Karlo Nograles said Malacañang would not comment on the ruling until the Office of the Executive Secretary had studied the decision and its next move, in consultation with Office of the Solicitor General.

But Nograles said that the antiterror law “underscores our commitment to seriously address terrorism and to uphold the rule of law.”

National Security Adviser Hermogenes Esperon Jr., the ATC vice chair, said he was happy that the law “was not declared entirely unconstitutional.”

In a statement, Vice President Leni Robredo said she was hoping that the rest of the concerns about the law would be substantially resolved once the full decision is released.

“We remain steadfast in our position: any antiterrorism legislation must truly address the root causes of terrorism, and should not be used as a pretext to stifle freedom of expression or legitimate dissent,” she said.

Among the contested provisions that the Supreme Court upheld are those that authorized the ATC to designate foreign or domestic groups and individuals as terrorists as well as the council’s authority to freeze their assets.

Still intact is Section 29, which allows state authorities to detain a suspect for 14 days, extendable for another 10 days, for “intelligence gathering” without a warrant of arrest issued by a court.

The Free Legal Assistance Group (FLAG), which served as counsel to a group of journalists who filed one of the petitions, said the court’s decision to strike down the qualifier in Section 4 was an “important win for the protection of civil liberties.”

FLAG lawyer Theodore Te said the Supreme Court’s statement that it decided “on the basis of the current petitions” could mean that the court may consider future challenges to the other provisions in actual cases.

But the law still has “so many fangs and claws” that could be used against activists, according to Pamalakaya chair Fernando Hicap, which plans to file a motion for reconsideration.

“We will continue both legal and political actions to challenge the ATA (Anti-Terrorism Act),” said National Union of Peoples’ Lawyers president Edre Olalia. “If the Bill of Rights are to be truly upheld, protected and fulfilled, we respectfully submit that it is not enough to affirm that activism is not terrorism even as it is a huge and welcome step in that direction.”

Ateneo School of Government dean Antonio La Viña said the decision on Section 4 “removes the chilling effect” of the law on free speech and assembly.

“But it is a small victory in what is still a big defeat of human rights,” La Viña said.

“The fight—including motions for reconsideration—must now focus on the provisions that affect due process rights and other rights of the accused: arrest and detention, designation by the Anti-Terror Council, freezing of funds, etc.,” he said.

Albay Rep. Edcel Lagman, one of the petitioners who argued against the law before the court, said the high tribunal failed “to fully uphold and protect due process, human rights and fundamental freedoms which are derogated by the controversial statute.”

Upholding the legality of the ATC’s authority to cause the detention of terror suspects without a judicial warrant of arrest was “a blatant violation of the Constitution,” he said.

Lagman said such suspects could be coerced and tortured by the police into making confessions.

“A shameful surrender to a thug who has destroyed the separation of powers,” Bello said on Twitter.

Sen. Panfilo “Ping” Lacson, one of the authors of the law, said the court’s decision largely upheld its constitutionality.

“Peace wins over terror, that is much clear,” he said.

The senator said the ruling would give the government the legal backbone to fight armed groups.

Sen. Francis “Kiko” Pangilinan, another petitioner, said the court’s declaration is a “partial victory” of the “relentless efforts of the petitioners and the people.”

Sen. Risa Hontiveros said the Senate was ready to exercise its oversight powers to ensure the proper implementation of the law and reminded the authorities that the antiterror law “does not give you the license to suppress dissent and trample on fundamental rights.” —WITH REPORTS FROM NESTOR CORRALES, LEILA B. SALAVERRIA, JEROME ANING, DEXTER CABALZA AND KRIXIA SUBINGSUBING