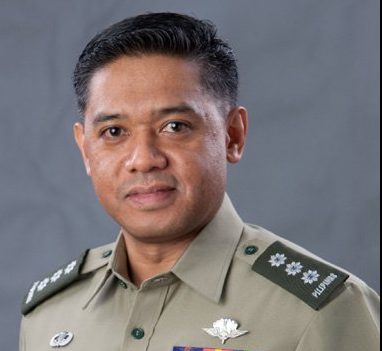 MARAWI CITY – President Duterte’s choice of Maj. Gen. Romeo Brawner Jr. as the next Philippine Army chief was welcomed and lauded by Zia Alonto-Adiong, deputy speaker of the Bangsamoro parliament, who said that Brawner brings to the office the values of dialogue and inclusivity.

Brawner was appointed to the post on Tuesday, succeeding Lt. Gen. Andres Centino who was named Armed Forces of the Philippines (AFP) chief of staff.

A member of the Philippine Military Academy “Makatao” Class of 1989, Brawner is currently commander of the Army’s 4th Infantry Division (4ID) based in Cagayan de Oro City.

“We worked together during the Marawi siege, and he has helped us get through with our humanitarian responses by listening to our peoples’ concerns,” recalled Adiong, who was spokesperson for the Lanao del Sur provincial government at that time.

Brawner was spokesperson of the Army’s Joint Task Force Marawi which dealt with the Islamic State (IS)-linked terrorists who laid siege on the city for five months beginning on May 23, 2017.

After the Marawi siege, Brawner took the helm of the Army’s 103rd Infantry Brigade, overseeing the pursuit against remnants of the IS terrorists in Lanao del Sur.

In September 2019, Brawner was plucked out of the field to become PMA Commandant of Cadets when the incumbent resigned as a fallout of the hazing death of Cadet 4th Class Darwin Dormitorio.

From the PMA, Brawner then served as AFP deputy chief of staff for financial management before taking the helm of the 4ID.

“We are proud to call him our brother because he shares and is also sensitive to the kind of narrative the Bangsamoro people continue to pursue,” Adiong said of Brawner who belongs to one of the indigenous tribes in the Cordillera.

“He is open to dialogue, an indication that he truly aims to understand the beating heart of the people,” Adiong added.