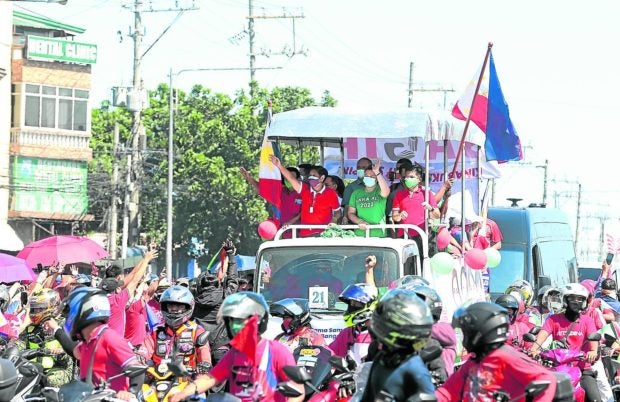 The event that started around 8 a.m. in front of the Commission on Audit caused heavy traffic along the stretch of Commonwealth Avenue and other main roads as thousands of supporters wearing red and green, the colors of the candidates, welcomed the pair.

From there, the motorcade went to Quezon Avenue before ending around 1 p.m. at Welcome Rotunda.

Marcos Jr. garnered the highest number of votes in Quezon City in 2016 but eventually lost the vice presidency to then Rep. Leni Robredo. Duterte’s father, then Davao City Mayor Rodrigo Duterte, was also the top choice of residents for president.

Based on the police estimate, there were “more or less” 6,000 participants in the caravan that caused a “monstrous traffic jam” on Commonwealth Avenue and connecting roads, to the dismay of an official who said the organizers did not apply for a permit.

“Monstrous traffic jam. Situation chaotic to the max,” Elmo San Diego, head of the city’s Department of Public Order and Safety (DPOS), told the Inquirer in an online message when asked to assess the traffic situation on roads where the caravan passed.

San Diego said the organizers of the motorcade did not apply for or requested a permit to hold the event.

“The Quezon City local government unit doesn’t have details of [the] activity such as number of participants, vehicles, etc., hence, a disorganized motorcade was noted,” he added.

The city government issued a separate statement in which it appealed to organizers to ensure the safety of participants, as well as affected residents.

It added that it was ready to provide assistance to candidates who intend to conduct political activities in the city “to ensure adherence to the minimum health protocols” amid the COVID-19 pandemic.

“The local government is saddened to learn the change of mind by the organizer of the motorcade and did not coordinate with the local government, even as there was a meeting last Monday where the city ensured that it would deploy not less than 1,000 policemen and members of DPOS, [Disaster Risk Reduction and Management Office], Task Force Disiplina and Bureau of Fire Protection,” it said. 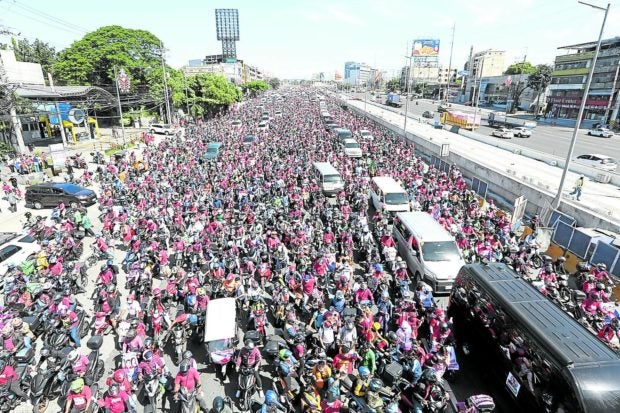 “We apologize and ask for understanding from motorists, travelers, the city government and even the [Metropolitan Manila Development Authority] if the Unity Caravan had caused heavy traffic,” lawyer Victor Rodriguez, Marcos Jr.’s spokesperson, said in a statement.

“We never anticipated that the carefully laid down preparation exerted by the organizers will be overwhelmed by the massive number of supporters who graced the occasion,” he added.

Anakalusugan Rep. Michael Defensor, who is running for Quezon City mayor, had organized the caravan together with his running mate, Councilor Winnie Castelo, and other lawmakers supporting the Marcos-Duterte duo.

“The people came out of their houses and occupied Commonwealth and Quezon Avenues to express their support for the BBM-Sara tandem. They represent the silent supermajority. This is unprecedented,” Defensor said.

He vowed to deliver more than 750,000 votes for the tandem in next year’s elections. According to Defensor, the city has about 1.3 million registered voters.

“The only chance of the opponent or a candidate to win is to disqualify BBM. Other than that, BBM will win,” he said.

Marcos Jr. is facing eight disqualification cases before the Commission on Elections (Comelec) with the petitioners citing his tax conviction 26 years ago.

But the son and namesake of  former President Ferdinand Marcos continued to brush aside the disqualification cases against him.

“We will continue the unity in the country. Your vote for Marcos and Sara Duterte is a vote for unity,” Marcos Jr. said in a brief message to supporters at the start of the motorcade.

Despite an appeal from the Department of Health and Department of the Interior and Local Government for politicians not to hold political rallies due to the threat of COVID-19, Marcos Jr. and Duterte were seen shaking hands with their supporters.

The Comelec earlier released a resolution prohibiting handshakes, kissing, hugging, “going arm-in-arm,” posing for photographs, and distributing food or drinks as well as other items at rallies, caucuses, conventions, and other political gatherings, among others, during the campaign period.

It warned that violating government health regulations would be considered an election offense.