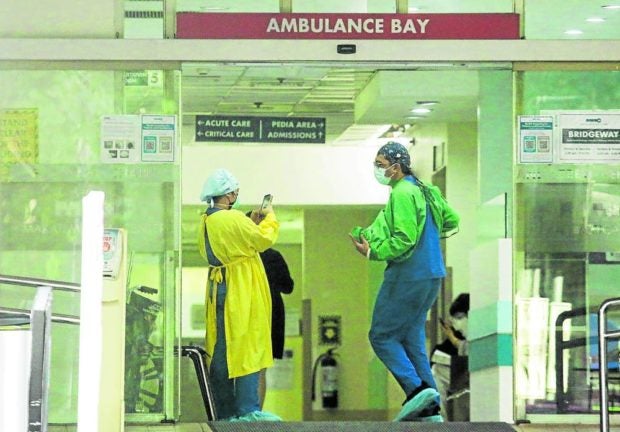 FINALLY, SOME RELIEF Health personnel share on Wednesday afternoon a light moment at the emergency room ambulance bay of Makati Medical Center that has been crowded with patients for the last several months. —LYN RILLON

MANILA, Philippines — The COVID-19 situation in the country continues to improve, especially in Metro Manila where the average number of cases has fallen to 105 a day from Dec. 1 to 7.

The municipality of Pateros also registered zero COVID-19 cases for five straight days as of Tuesday.

The Bureau of Jail Management and Penology (BJMP) likewise reported on Wednesday that it did not record any COVID-19 case among its personnel and persons deprived of liberty (PDLs) in all of its jails across the country.

MMC medical director Dr. Saturnino Javier said that while the hospital registered zero COVID-19 patient for the first time in 20 months, “this can change anytime—but for now, this should inspire confidence among the scared and anxious patients to get reconnected with their MMC physicians once again.”

At OsMak, there were 54 patients with COVID-like symptoms earlier in December, but all tested negative after undergoing swab tests.

As of Wednesday, the city is classified as low risk with 31 active cases, zero death and one recovery.

The rest of the LGUs in the capital region were at “low risk” classification, he added.

Guido noted that in NCR, the incidence or average daily attack rate (Adar) was less than 1 at 0.74 per day per 100,000 population.

He also said that the reproduction number, or the number of people that one positive COVID-19 case can infect, was very low at 0.34 while the test positivity rate was just 1.1 percent.

Health Secretary Francisco Duque III added in a radio interview on Wednesday that they were not expecting a postholiday surge similar to previous ones that the country had.

“As long as we won’t be complacent [and] continue to comply with the minimum public health standards, cases may remain low. It may not be similar to the level of cases we had during the Delta surge,” he said.

“Hopefully, the surge, if there will be one, will not be similar to our highest,” he added.

Duque noted that during the Delta surge, the country recorded a seven-day moving average of 21,000 to 22,000 daily.

He said it would also help that the country now has a high vaccination rate and many people have already acquired natural immunity from previous infection.

OCTA Research earlier said that a COVID-19 surge triggered by the new Omicron variant might occur in January or February 2022.

The Department of Health (DOH) on Wednesday reported 370 new COVID-19 cases, up from the 356 cases on Tuesday.

There were 861 people who recovered from the respiratory illness, bringing total recoveries to 2.77 million.

Citing the test results of 28,942 people last Monday, the DOH said the country’s COVID-19 positivity rate was at 1.6 percent, higher than Tuesday’s 1.4 percent but still within the World Health Organization’s positivity target rate of below 5 percent.

The DOH also reported in its Dec. 8 bulletin that 24 percent of intensive care unit (ICU) beds and 14 percent of mechanical ventilators across the country were in use.

Meanwhile, the DOH clarified the high fatality rate for the month of November cited in an international COVID-19 recovery ranking.

According to Nikkei Asia’s COVID-19 Recovery Index, the Philippines leaped from 103rd to 57th in the index, which measures a government’s pandemic response toward recovery.

But while the country’s infection numbers have dropped from the September peak, its short-term case fatality rate (CFR) stood at more than 9 percent—the second highest in the world, Nikkei added.

“The high reported deaths in this latter part of November 2021 was due to delayed encoding, validation and reporting of death information to COVIDKaya,” the DOH said in a statement.

Of the 2,096 deaths reported for that period, only 16 percent occurred in November, while 80 percent happened between August and October, according to the DOH.

Health Undersecretary Maria Rosario Vergeire said the country’s CFR as of Dec. 7, 2021, was 1.61 percent, or below the global average of 2 percent.