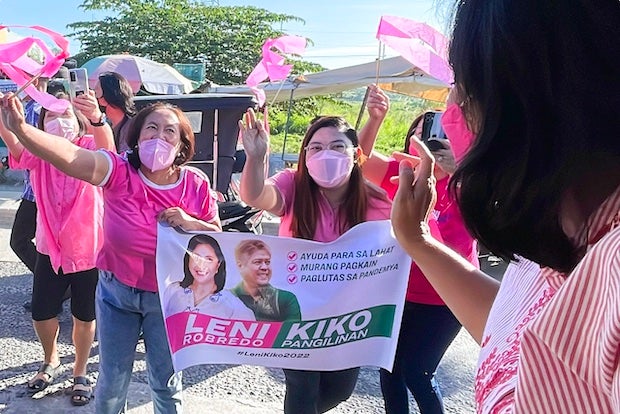 Vice President Leni Robredo (side to camera) waves from the open door of her van at supporters lined up at a road in Tarlac on Wednesday, Dec. 8, 2021. (Photo from her Facebook page)

MANILA, Philippines — Voters should be able to see the love that candidates have for the poor by looking at their track record even when it’s not the election campaign period, Vice President Leni Robredo told her supporters during her visit to Tarlac province on Wednesday.

Robredo, who is seeking the presidency in the 2022 polls, noted that candidates with a genuine concern for poor Filipinos would work for their welfare even with or without the election season.

“When candidates say  ‘I love the poor,’ that can be seen in their track record. With or without elections, they are helping people. Campaign season or not, they are working for the people’s welfare,” Robredo said in Filipino.

“That’s my big assignment now because all of you here are volunteers, right? It is not yet the official campaign period, but we can do a lot. We still have six months remaining,” she added.

According to Robredo, many people she had encountered during her visit to different areas were asking for job opportunities.

“We have a lot of proposals to resolve our problem with the lack of jobs. All candidates will tell you that they have a solution, right? All candidates are like that during campaign season. They will court you for votes and say they love the poor and will give jobs to the poor,” she said.

“But I will only say one thing. Maybe we should ask them: When they were not yet a candidate, where were they?” she added.

Robredo also noted that the Office of the Vice President had extended help to Filipinos during the pandemic despite limited resources.