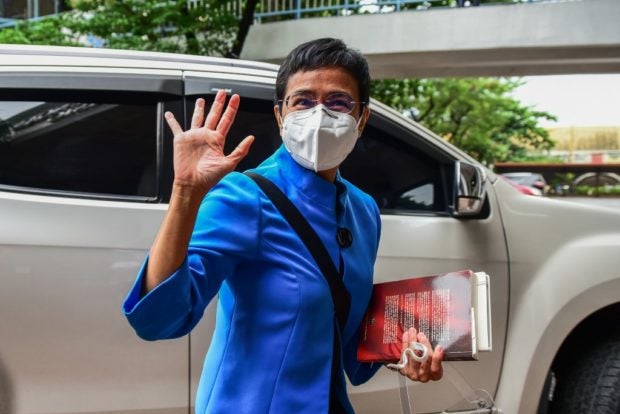 Philippine journalist Maria Ressa waves to members of the media after attending a court hearing in Manila on July 22, 2020, on charges of tax evasion. FILE PHOTO / AFP

MANILA, Philippines — The Court of Tax Appeals (CTA) has given the green light for Rappler chief executive officer and journalist Maria Ressa, who is facing several charges including tax evasion, to fly to Oslo to personally receive her Nobel Peace Prize.

The court said that the permission for her to travel would only cover her trip to Oslo, Norway, which will take place on Dec. 8 to Dec. 13, as provided in Ressa’s motion.

Tax evasion charges had been filed against Ressa and Rappler Holdings Corp. over the sale of Philippine Depositary Receipts.

“If accused fails to return as undertaken, trial will proceed as scheduled in her absence,” read the CTA’s resolution.

The Court of Appeals earlier approved Ressa’s travel to Oslo. Ressa, along with Russian journalist Dmitry Muratov, won the Nobel Peace Prize, for their “efforts to safeguard press freedom.”