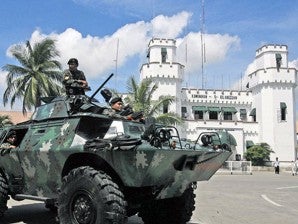 NO SECRET. Members of the Special Action Force assigned to secure the perimeter of the National Bilibid Prison in Muntinlupa City for the “surprise visit” of President Aquino on Wednesday leave the compound aboard an armored personnel carrier after the Palace canceled the inspection. EDWIN BACASMAS

If the Presidential Security Guard (PSG) is around, can the boss be far behind?

Shortly before 9 a.m. Wednesday, two inmates of the maximum security compound of the New Bilibid Prison (NBP) called the attention of the praetorian guards unusually stationed there and said President Aquino’s “surprise” visit had been called off.

An insider recalled to the Inquirer the irony involving the surprise inspection that Mr. Aquino had planned to make in order to see for himself the conditions at the NBP.

Malacañang and the Department of Justice (DoJ) told reporters assembled at the prison that the visit was canceled because the President was unwell.

But members of an advance party from the Palace, speaking on condition of anonymity for lack of authority to discuss the matter publicly, said the visit had been leaked to reporters, which explained why TV and radio crews were staking out the fringes of the penitentiary as early as 7 a.m.

The Inquirer had chanced upon members of the advance party eating breakfast at a fastfood store in Muntinlupa City.

“The visit was the President’s initiative. For some reason, information went out about [it],” one official said.

He said a radio reporter mentioned the visit on air ahead of the scheduled 9 a.m. inspection.

“We did not want our intentions to be misinterpreted. The President wants to see the situation on the ground, and his office decided to keep the inspection closed to media coverage,” the official said.

“We planned to tell the Malacañang press corps about it when the inspection began as scheduled,” he said.

But even if the inspection had pushed through, Mr. Aquino was not likely to see the real picture, according to a source at the Bureau of Corrections (BuCor) who also asked not to be named.

The source said Building 1 (formerly the Death Row area) and Building 6 in the maximum security compound were cleared as early as Tuesday night and the inmates moved to separate locations for the duration of Mr. Aquino’s visit.

“The only real thing the President would have seen for himself was the pressing water problem in the compound,” the source said.

He said that the prisoners had been without a stable water source for days because of broken pumps at the deep well, and that they had been queuing somewhere to collect the precious resource.

The visit was not listed in Mr. Aquino’s official itinerary, but the security preparations mounted by the PSG and the police practically gave it away.

Two companies from the PSG in two tour buses, another company from the elite Special Action Force, and some 100 members of the Southern Police District and the Muntinlupa Police Station, not counting intelligence personnel in plainclothes, had converged on the penitentiary.

All the security forces were in full battle gear, with a contingent force carrying riot shields and batons. Police commandos brought in two armored personnel carriers from Camp Bagong Diwa in Taguig City.

A prison guard said some members of the PSG were seen as early as a week ago.

The members of the Palace advance party could not pinpoint the information breach. They said that as far as they were concerned, only the DoJ knew about the surprise visit.

“In all honesty, we were dispatched here to evaluate the area [for the President],” an official said. “We would have to check first where the information came out.”

She toured the maximum security compound and visited the “Abadilla 5,” who had been seeking executive clemency in a letter signed in their own blood.

But some guards seemed prepared for the visit, handing out flyers that presented their version of the state of the BuCor, including salary differences with the employees of the Bureau of Jail Management and Penology.

The flyers also carried messages calling for the passage of the proposed BuCor modernization act, which is among the offshoots of a congressional inquiry into and inspection of the NBP.

Even the people living in the prison reservation hoped to see the President in the flesh. Wives of BuCor employees positioned themselves at strategic points, saying they would ask him to address the plight of their husbands.

At Wednesday’s news briefing in Malacañang, the President’s spokesperson Edwin Lacierda said certain arrangements were made at the NBP to ensure the surprise element of the visit as well as Mr. Aquino’s safety.

But as it turned out, Lacierda said, the measures were useless to prevent a leak. He said he would have to discuss the matter with De Lima.

“I was already about to board the chopper when I was told the [visit] had been canceled because, I think, the element of surprise was negated,” he said.

Asked where the leak had come from, he said he did not know.

Lacierda also indicated that there was nothing wrong with Mr. Aquino’s health that could have caused him to skip the prison inspection.

According to Lacierda, Mr. Aquino wanted to see for himself the conditions at the NBP after it made the headlines for the VIP treatment being enjoyed by certain inmates as well as the problem of congestion.

The prison system came under scrutiny after former Batangas Gov. Antonio Leviste, a homicide convict, was caught in Makati City last month without a pass.

“The idea [was] to prevent [BuCor] officials from knowing that the President was coming to visit, and to observe what is really going on in the penitentiary,” Lacierda said.

Asked how Mr. Aquino could make an unexpected visit anywhere when the PSG had to secure the area beforehand, Lacierda said arrangements were made by the DOJ to keep prison officials from knowing about the inspection.

He declined to elaborate “to ensure that the [next] visit would be a surprise.”

De Lima had received a message from the Office of the President (OP) saying Mr. Aquino was not coming because he was feeling unwell, DoJ public information officer Alex Lactao told the Inquirer.

“That’s all we know from the OP,” Lactao said when asked if the leak had anything to do with the canceled visit. “I cannot say more than that.”

De Lima denied talk that her office was to blame for the cancellation of the visit.

“Somebody might be making up stories to drive a wedge between [me and the President]. May I advise you to please check those reports,” she told reporters.

De Lima declined to comment on talk that the PSG might have compromised the “element of surprise.”

“I cannot say that because that’s a security matter,” she said. With reports from Norman Bordadora and Marlon Ramos