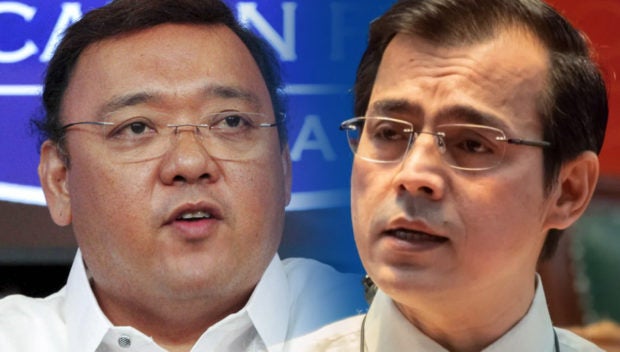 Moreno — who referred to Roque as both “secretary” and “senator” — acknowledged that defending the policies of the Duterte administration is difficult.

Even though the two had a few disagreements in the past, Moreno said he appreciated Roque’s contributions to the government.

“And sa totoo lamang, Harry, natutuwa kami talaga sa’yo (And really, Harry, we’re happy about what you did) on how to really, you know, make a point on something.  We may disagree and agree on something but what matters most, at the end of day, we must excel from our field of undertaking,” Moreno said during the awarding of Sugbo Negosyo Champions in Cebu City on Monday.

“And I think, Secretary Harry Roque, you excelled in your field of undertaking, Senator Harry Roque,” he added.

According to the mayor, he and his campaign manager Lito Banayo talked in the past about how hard Roque’s job was, as he also laid out, clarified and defended COVID-19 policies installed by the Inter-Agency Task Force for the Management of Emerging Infectious Diseases (IATF).

(Our partner in the IATF, and our usual online meeting buddy every week, I think twice, thrice a week in Metro Manila.  He really has a hard time with his position.)

“Minsan po napagkaka-usapan namin ni Ambassador Lito Banayo on how hard it is on defending such policy, but he has to because that’s part of the job,” he added.

(There was a time when I and Ambassador Lito Banayo talked about how hard it is to defend such a policy, but he has to because that’s part of the job.)

INQUIRER.net sought the side of Moreno’s campaign team as to whether Roque would be the latest addition to Aksyon Demokratiko’s senatorial slate after the mayor expressed intent to include President Rodrigo Duterte.  However, no reply has been made as of posting time.

Moreno and Roque were guests during the events on Monday, starting off with the Christmas lighting event at the Cebu provincial capitol.  On lunch of that day, the two were seen seated beside each other, along with other Cebu officials like Governor Gwendolyn Garcia, Cebu Mayor Mike Rama, and Cebu Rep. PJ Garcia.

“I would also like to greet […] Mayor Isko Moreno, I will let you be the judge but people say we look like twins.  Sabi ko medyo mas guwapo ako nang kaunti kay (they said I look more handsome than) Mayor Isko, but that’s what they say,” he said.

The two government officials were on opposing ends just a few months ago, after Roque said that Moreno’s call to shun the use of face shields and buy anti-COVID-19 medicines instead was merely politicking, in preparations of a presidential candidacy.

Moreno then countered Roque, asking him how asking for medicines which the people need could be considered politicking.

Speaking of officials on opposing ends, Roque also addressed the government’s past quarrel with Governor Garcia, who adopted a COVID-19 testing policy different from the national government’s.

Roque admitted that it was hard to speak about IATF policies especially when he knew that his ‘BFF’ — Garcia — was actually right.

“Perhaps many of you have heard me say, many policies that IATF formulated, and many of these policies were in direct contradiction to the policies of my BFF, Governor Garcia.  Let it now be said that history has finally judged this series of events, and history has shown Governor Gwen Garcia to be correct,” he said.

“What was most difficult was to defend the policies of the IATF knowing deep inside me that I share the same exact views of my BFF, which has now prompted me to seek a seat in the Senate,” he added