US observes 80th anniversary of attack on Pearl Harbor 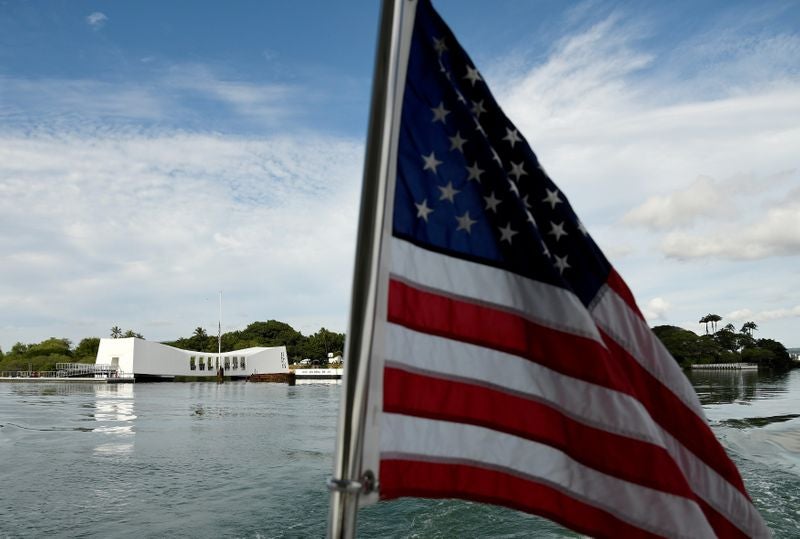 The USS Arizona Memorial can be seen from a shuttle boat during the 75th anniversary of the attack on Pearl Harbor in Honolulu, Hawaii December 7, 2016. REUTERS/Hugh Gentry/File Photo

The United States will mark the 80th anniversary of the Japanese attack on the U.S. naval base in Pearl Harbor, Hawaii, on Tuesday.

The attack on Dec. 7, 1941, shook a country that had been so focused on World War Two in Europe that it had lost sight of the threat posed by Japan, according to historians.

The attack killed 2,390 Americans, and the United States declared war on Japan the next day.

The bombing was famously dubbed “a date which will live in infamy” by then-U.S. President Franklin D. Roosevelt.

The United States defeated Japan in August 1945, days after U.S. atomic bomb attacks on Hiroshima and Nagasaki killed hundreds of thousands of civilians.

Read Next
WHO advises against blood plasma treatment for COVID-19 patients
EDITORS' PICK
Gear up and get ready to play with Yamaha Mio Gear
On Day 2 of implementation, gov’t says workers now exempt from ‘no vax, no ride’ policy
DOH: 28,471 new COVID-19 cases in PH; active cases now 284,458
Over 3 Million worth of prizes to be won at Smart Padala’s SENDali Manalo Promo!
Metro Manila posts lowest temperature yet this ‘amihan’ season at 19°C
Acer starts the year off strong with the Aspire Vero National Geographic Edition
MOST READ
In Batanes, octogenarian dies of COVID-19
Cold-case investigation names surprise suspect in Anne Frank’s betrayal
Czech anti-vax singer dies after deliberate infection
Derek Ramsay on being married to Ellen Adarna: ‘Gumaan ‘yung mundo ko’
Don't miss out on the latest news and information.