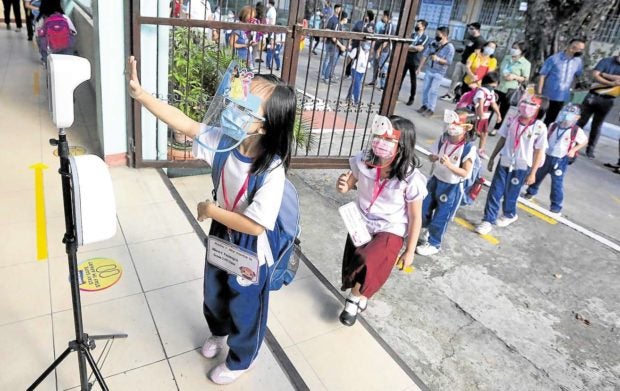 READY TO LEARN Kindergarten to Grade 3 pupils of Aurora A. Quezon Elementary School in Manila wait for their turn to have their temperature checked before they enter their classrooms on Monday, as select schools in Metro Manila start in-person classes. —MARIANNE BERMUDEZ

MANILA, Philippines — The Department of Education (DepEd) expects more schools to be allowed to hold in-person classes next year following the smooth implementation of the pilot run in 118 schools last month and in an additional 177, including 28 in Metro Manila, starting this week.

So far, the physical classes have been going well with no reported COVID-19 cases among participants, DepEd Undersecretary Nepomuceno Malaluan said at the Laging Handa briefing on Monday.

He added that the second batch of schools was likely to be the last to be added to the pilot run this year as students were expected to go on break starting Dec. 20.

After that, participating schools would submit their assessment using the DepEd’s monitoring and evaluation tool, with the consolidated report to be submitted to the Office of the President before the end of the month.

“Since so far it has been going well, we anticipate that the recommendation will be to move to what we call the expanded phase early next year,” Malaluan said.

Asked how the Omicron COVID-19 variant could affect the reopening of more schools, he said the DepEd would rely on the assessment of the Department of Health (DOH).

On the first day of limited in-person classes at Pasig Elementary School, parents dropped off students who underwent a temperature check before being escorted by teachers to their classrooms.

Despite the masks that concealed half of their faces, the children’s eagerness and excitement were visible as they participated in the morning ceremonies, including singing the national anthem and a simple dance exercise.

For 13 Grade 1 students, Monday was the first time they entered the school and met their classmates and teachers in the flesh.

Unlike other pilot schools, there were no plastic barriers around students’ seats with Pasig Mayor Vico Sotto saying that ultraviolet lights, acrylic barriers, and other additional equipment were unnecessary.

He cited the opinion of experts that as long as there was proper airflow and ventilation inside a room, people there would be safe.

“We don’t need to be fancy about it and add a lot [of stuff]. What we want is what would be simpler, safer, and sustainable,” Sotto told reporters.

“We need to remember that this is just a pilot program and we are going to assess in the coming weeks whether we can actually start the face-to-face classes,” Zamora said.

The Movement for Safe, Equitable, Quality, and Relevant (SEQuRe) Education, a network of education experts, teachers, students, and parents, launched on Monday a campaign to monitor the implementation of the pilot program for in-person classes.

Through the group’s Bantay Balik Paaralan (BBP) project, the public can forward their concerns and observations to 0967-4461266 or 0917-6395942. They can also send messages to facebook.com/SEQuReEducationMovt or [email protected]

According to Mercedes Arzadon, SEQuRe Education Movement convener, their project was prompted by the government’s weak response after only 177 out of 62,700 primary and secondary schools, and 65 out of over 200 higher education institutions were allowed to hold in-person classes.

The pilot program, she said, also needs to be monitored to gain insights in preparation for its expansion nationwide.

Among the initial concerns received so far by SEQuRe Education Movement were insufficient health protection mechanisms and the contradicting policies of the DepEd, the DOH, and the Inter-Agency Task Force for the Management of Emerging Infectious Diseases on the mandatory vaccination of school personnel.

The lack of clear guidelines on content and teaching methods for in-person classes to be integrated with remote learning was also raised.