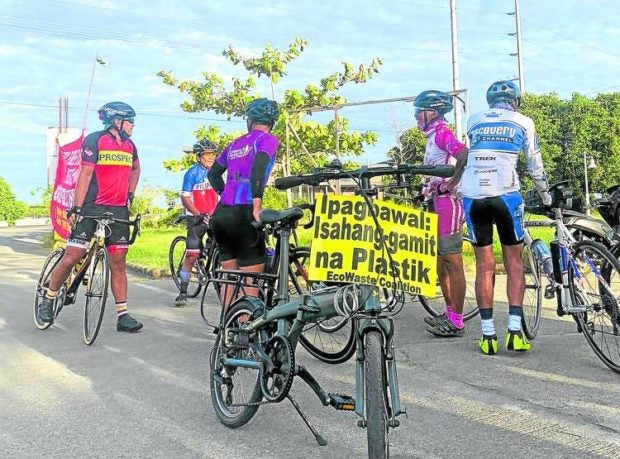 DAGUPAN CITY, Pangasinan, Philippines — Several environmental groups staged a solidarity bike ride on Sunday to call for a ban on single-use plastic and incineration, and to oppose the planned offshore black sand mining in Lingayen Gulf.

At least 30 bikers belonging to the so-called “green groups” advocating environmental protection took to the streets of this city and traveled 13 kilometers for “Padyak Para sa Kalikasan (Bike Ride for the Environment),” culminating at Tondaligan Park in Barangay Bonuan Gueset.

Coleen Salamat, the bike ride lead organizer and EcoWaste Coalition policy advocacy officer, said plastic pollution had been a “major driver” in the climate crisis, as identified during the 2021 United Nations Climate Change Conference, which was held in Glasgow, Scotland, from Oct. 31 to Nov. 12.

Congress has pending measures against single-use plastics (House Bill No. 9147 and Senate Bill No. 333) but “there are no movements on these bills at the moment,” Salamat said in a statement.

She said candidates in the 2022 elections should be asked to champion environmental causes.

Salamat said getting the support of environmental advocates in Pangasinan would be “vital in defending the people and the planet against pollution, plastics and profit.”

“We are readying our ranks to push forward this agenda as the election season warms up,” Salamat said.

Pangasinan People’s Strike for the Environment (PPSE), which joined the bike ride, also expressed the group’s indignation over the proposed offshore magnetite mining in Lingayen Gulf, which would cover 9,252.45 hectares in the municipal waters off the towns of Sual, Labrador, Lingayen, Binmaley and this city.

Joaquin Alano, founder of a local bikers’ club, said communities were always at the receiving end of environmental destruction.

“We say time’s up. We are here to show our solidarity to the call to end the toxic plastic pollution and to stop the offshore mining,” Alano said during the protest.

The groups also assailed the proposed waste-to-energy projects in this city, the nearby towns of Umingan and San Fabian, and Urdaneta City, saying incineration would only lead to more problems, as “the process merely transforms the waste into other forms of trash, such as toxic ash, and air and water pollution, which are harder to contain and usually more harmful than the original form of the waste.”

Dagupan City Mayor Brian Lim had already rejected the planned waste-to-energy project here because the proponents have yet to address its impact on the environment. INQ