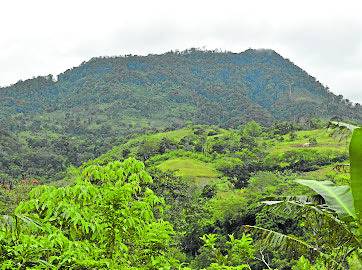 AT RISK The Makabol forest in Davao City, a nesting site for the highly endangered Philippine eagle, is threatened by tree cutting activities allowed by the Department of Environment and Natural Resources, environmentalists warn. —BENITO ANTHONY PINGOY

DAVAO CITY, Davao del Sur, Philippines — Environmentalists, including those with Philippine Eagle Center (PEC) and other civil society groups, are opposing the cutting of 121 nature trees in the Makabol forest in Barangay Salaysay here, which is part of the watershed area that replenishes the city’s aquifers and is an ancient nesting site of the critically endangered Philippine eagle.

The groups, led by Ecoteneo, an advocacy group of the Ateneo de Davao University, and PEC, have also circulated a petition online calling for the cancellation of the cutting permit issued by the Department of Environment and Natural Resources (DENR) to the landowner in the area, adding that environment authorities here need to affirm the area as a protected site.

Jayson Ibanez, director of research and conservation at PEC, said the trees that were being cut were only 100 to 200 meters away from the nest trees of the Philippine eagle.

“Our evidence is strong that it’s an ancient nesting site but so far, they don’t want to cancel the permit,” he said.

In a consultation with community folks last month, DENR officials who issued the permit said that the 121 trees that were being cut were already “overmature and may die eventually.” 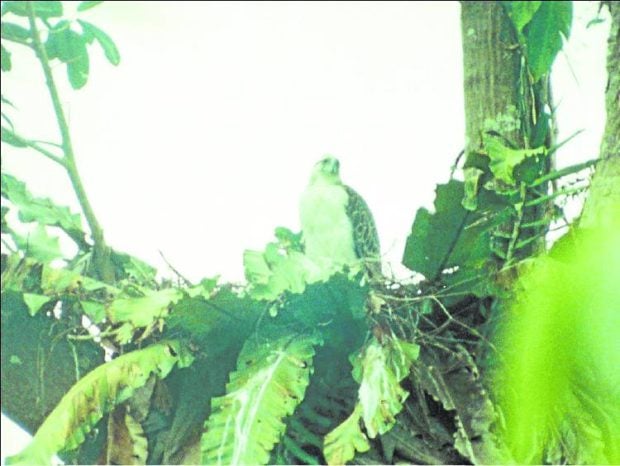 AT RISK: The nesting site of Philippine Eagle, such as this eaglet shown in this photo, is only 100 to 200 meters away from the old-growth trees that are being cut in the Makabol forest in Davao City. PHOTO COURTESY OF THE PHILIPPINE EAGLE CENTER

But Ibanez disagreed: “Trees can … live hundred[s] and even beyond a thousand years if left to [themselves]. Data shows that ancient trees are mother trees and can sequester more carbon [dioxide] from the environment.”

Benito Anthony Pingoy, a teacher at Holy Cross College here who frequented the area, said the communities living in the subvillages of Cantimon, Falcata, and Laya were also increasingly worried about their water source and have opposed the cutting of mostly old-growth Agoho pine.

“Once we allowed one [landowner to cut the trees], it will not stop the rest [of the landowners] from cutting down trees, until the entire forest would be wiped out,” Pingoy told the Inquirer by phone.

Ibanez said that aside from being an ancient eagle’s nest site, the area had been part of an environmentally critical watershed area protected by the Davao City Watershed Management Code. But these data were not used as references for the cutting permit application.

He said the DENR had issued the private land timber permit, which had been used by the landowner as the basis for cutting the trees.

The petitioners said that they wanted to secure the Mounts Makabol and Alikoson conservation areas because they were the lifeblood of all the residents of Salaysay, save the watershed and spare the only home for a family of the “critically endangered” Philippine eagle.

The mountains of Makabol and Alikoson cover an 8,819-hectare “conservation area,” which supports the livelihoods of over 6,000 residents Salaysay in the uplands of Davao City.