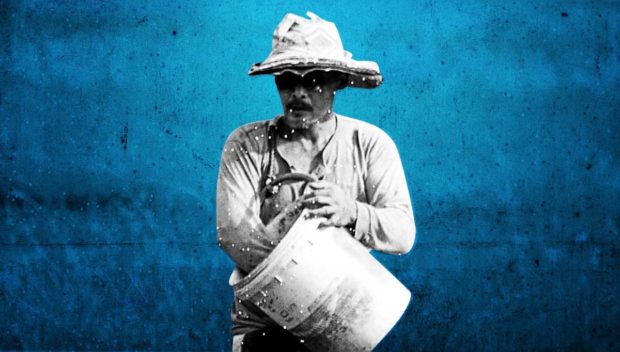 MANILA, Philippines—A fertilizer subsidy program that was registering nearly 100 percent accomplishment rate has ran afoul with an agriculture producers’ and farming party-list group because of the alleged failure of the government in paying dealers of fertilizers that had been distributed to farmers.

The umbrella group of agricultural organizations and party-list on Monday (Dec. 6) sought an inquiry by the Senate on the alleged failure by the Department of Agriculture (DA) to pay at least P100 million worth of fertilizers supplied by dealers from the Ilocos region.

In a statement, Samahang Industriya ng Agrikultura (SINAG) and Abono party-list said they will ask the office of Senator Cynthia Villar, chair of the Senate agriculture committee, to investigate the reports of failure to pay the fertilizer dealers.

“Some dealers can no longer serve the farmers because they have yet to receive payment from the DA,” said Rosendo So, SINAG and Abono party-list chair.

“Where will the farmers turn to for their fertilizer needs? And how long must these dealers who have advanced their supply wait for payment to arrive?” he said.

“The budget is there, so why is there a hold up at the DA?” he added.

According to the statement, the unpaid dealers participated in the DA’s National Rice Program—Fertilizer Discount Vouchers to Rice Farmers program, wherein a fertilizer voucher of P2,000 is given to farmers planting inbred seeds and P3,000 for those planting hybrid seeds. 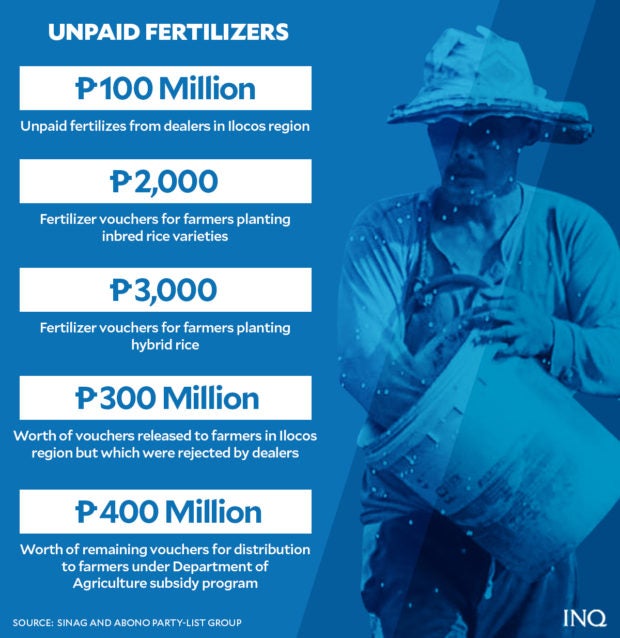 The statement said SINAG had received a complaint from  Ronnie Cabanizas, spokesman of Association of Fertilizer and Pesticides, Distribution, Dealers and outlet of Pangasinan (AFPDOP), saying the DA failed to pay the dealers some P100 million worth of fertilizers which they have already delivered to farmer-beneficiaries.

This, according to Cabanizas, was despite the availability of DA’s funds.

SINAG likewise said another P300 million worth of vouchers had already been given to farmers from the Ilocos region, “but the farmers complained that when they presented the voucher to the authorized fertilizer outlets to get the subsidy, the merchant told them that they cannot serve them since the DA has not yet paid them of their previous request for payouts for previously delivered fertilizers.”

“Of the total, only 14,543 farmers in Ilocos Sur and 26,927 farmers in Ilocos Norte qualified for the e-voucher fertilizer reimbursement for the dry season 2020-2021, as they were the ones who actually planted, based on the validation made by the Municipal Agriculture Offices in said provinces,” Domenden said.

Agriculture Secretary William Dar said the distribution rate in Ilocos Norte was at 97.8 percent with 21,114 claimed fertilizer vouchers, out of the total 21,744.

According to So, similar grievances have also been reported from authorized fertilizer dealers in other regions covered by the DA’s program, stating that they have also been left unpaid for their fertilizers.

The DA explained that under the RRP2 fertilizer subsidy guidelines through the voucher system, only those farmers in specified Rice Competitiveness Enhancement Fund (RCEF) areas and non-RCEF areas, who planted during the 2020-2021 dry season, were qualified to receive free fertilizers.

Recipients should also be listed in the farmer’s registry or RSBSA.

“The DA accredited fertilizer dealers can no longer serve the farmer-beneficiaries because the department has not yet paid them of their collectibles, which they badly needed in order to buy new supplies of fertilizer so they can continue to serve the other farmers who are also recipients of the DA’s fertilizer vouchers,” said So.

He added that the “DA’s failure to settle its obligations with the dealers may result in the non-distribution of the remaining P400 million worth of fertilizers under its rice resiliency program.”

“Why can’t the DA pay the dealers of the fertilizers already given to rice farmer-beneficiaries under the government’s fertilizer’s subsidy program when the state-owned Development Bank of the Philippines confirms the availability of the funds?” So said.

Before the complaints on the voucher subsidy program, So said the DA was able to settle obligations within five days after the dealers made the transmittal of their billings for fertilizers they delivered to farmer recipients.

The delay in the DA payment “threatens the implementation of the remaining P400 million worth of fertilizer subsidy program to rice farmers,” said So.

On Nov. 3, Agriculture Undersecretary Ariel Cayanan said the DA will try to seek additional funding from the Office of the President to increase its fertilizer subsidy for rice farmers.

Cayanan explained that the prices of urea, a type of fertilizer for rice, have gone up to an average of P1,718 per bag from P800 per bag.

“Usually we give farmers two bags of fertilizers for inbred farmers and three bags for hybrid farmers. Because of the high prices, these may be cut in half,” he said.