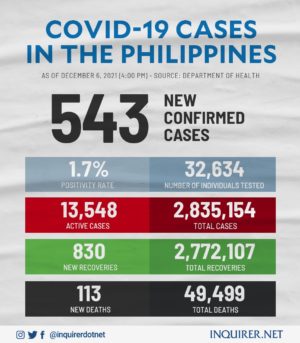 Counting the latest cases marks the 13th consecutive day that the country has recorded fewer than 1,000 cases, taking the total number of confirmed infections to 2,835,154 and the number of recoveries to 2,772,107.

Meanwhile, the positivity rate is at 1.7 percent out of the 32,634 tests conducted.

Meanwhile, DOH said that two laboratories were not operational, while five labs were not able to submit their data to the COVID-19 Document Repository System on the tests conducted on Dec. 4. These seven labs contribute, on average, 0.1 percent of samples tested and 0.4 percent of positive individuals.

The health agency also said that it removed 12 duplicates from the total case count — of which 10 were recoveries.

“In addition, 152 cases were found to have tested negative and have been removed from the total case count. Of these, 147 are recoveries,” said the DOH.

“Moreover, 102 cases that were previously tagged as recoveries were reclassified as deaths after final validation,” it added.