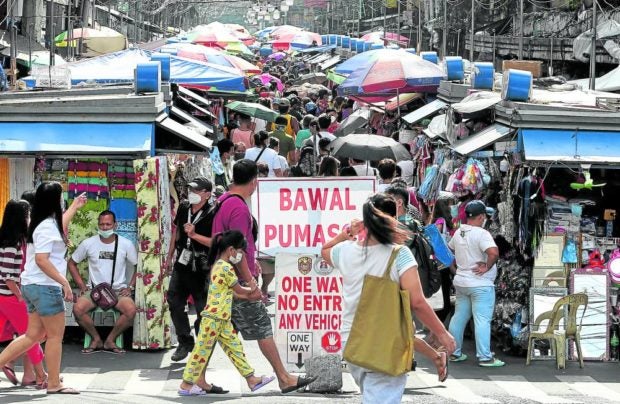 VIRUS-FREE? The shoppers are back in Divisoria, Manila, on Sunday, crowding around stalls but apparently forgetting to keep safe physical distancing. —MARIANNE BERMUDEZ

The Department of Health (DOH) on Sunday reported 603 new cases and 156 more deaths. The fatalities continued to climb also because of delayed reporting.

Of the 156 deaths in Sunday’s bulletin, the department said 56 died in November and 12 died in December. The rest were from more than a month ago.

According to the DOH, the delayed reporting was due to “late encoding of death information to COVIDKaya,” referring to its case collection system.

“This issue is currently being coordinated with the epidemiology and surveillance units to ensure information is up to date,” the department said.

The DOH also said 115 of the latest fatalities were previously tagged as recoveries and since reclassified “after final validation.”

The 13,853 active cases reported on Sunday were the lowest since June 1 last year.

Only 1.8 percent of 35,950 tested on Friday were found positive for the coronavirus.

Four laboratories did not submit their data while two were not operational that day.

Despite the growing number of countries and territories reporting cases of the Omicron variant of the novel coronavirus, the Inter-Agency Task Force for the Management of Emerging Infectious Diseases (IATF) said it would stick to its day-by-day assessment of the COVID-19 situation abroad before adding more areas to its so-called red list.

“Our assessment of what is happening in the entire world with regard to Omicron is conducted day by day. If we need to red-list [a country or territory], we do it quickly based on the incidence, based on the growth rate of the virus, whether it’s Omicron or not,” acting presidential spokesperson Karlo Nograles said in an interview with radio station dzBB on Saturday.

Nograles, who is also IATF cochair, said the problem in monitoring the Omicron variant abroad is prompt detection.

“The Omicron, it’s not that quick [to detect], it’s not like you take an RT-PCR (reverse transcription-polymerase chain reaction) test, you’ll know at once that it’s Omicron. It isn’t. So worldwide, there are genomic sequencings being done to detect Omicron,” he said.

This is why quarantine and testing protocols were restored for inbound travelers from countries and territories not under the red list, he said.

“This way, whatever country it is [that travelers are coming from], even [if] it is not under the red list, the country is better protected if there will be a more stringent [protocol for a] longer [quarantine period] with RT-PCR test on the fifth day [of quarantine],” Nograles said.

Red-list countries and territories are those classified under IATF Resolution No. 136 as “high risk.”

For areas with populations greater than 100,000, if the incidence rate, or cumulative new cases over the past 28 days per 100,000 population, shall be more than 500, the area shall be placed under the red list.

Also to be placed under the red list are areas with populations of less than 100,000 with cumulative new cases over the past 28 days at more than 500.

Under IATF Resolution No. 152, which took effect on Friday, travelers from countries and territories not placed under the red list must secure a negative RT-PCR test conducted within 72 hours prior to departure from the country of origin.

Upon their arrival, they will be quarantined in a government facility for five days and will be placed under home quarantine for nine more days, regardless of their swab test results.

The IATF tasked the Department of Transportation to ensure that airlines board only passengers who comply with the requirement for RT-PCR testing before travel.