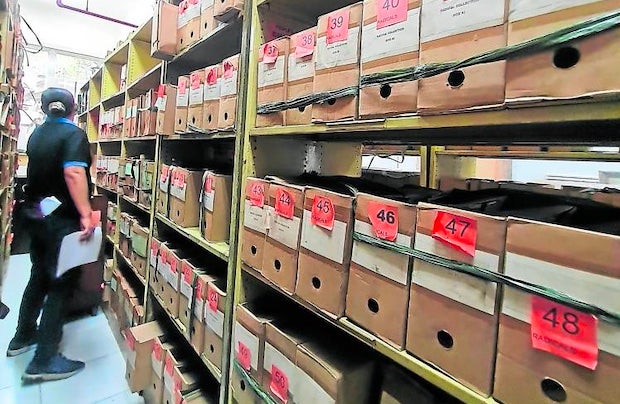 FOR POSTERITY: Thousands of books, pamphlets, speeches, and other writings against the Marcos regime are being put in order at the library of the University of the Philippines Diliman. But these materials may face the threat of confiscation amid a counterinsurgency campaign that has also trained its sights on campuses. (Photo by KRIXIA SUBINGSUBING / Philippine Daily Inquirer)

MANILA, Philippines — When President Ferdinand Marcos declared martial law in 1972 and extended his rule as dictator, the University of the Philippines Main Library became a repository for the writings of the political underground — hiding them from the scrutiny of the military and police, despite the Diliman campus having been the center stage of student protests until martial law.

Under the shadow of Presidential Decree No. 885 issued in 1976 — which imposed such penalties as imprisonment and confiscation of property against anyone caught in possession of “subversive documents” — books, newspapers, manifestos, leaflets, speeches, poems, and songs that were all critical of Marcos were secretly stored in the UP library even as the crackdown on dissent went in earnest.

This collection, which was eventually kept in a total of 51 boxes, remained hidden and unorganized even after Marcos’ ouster in 1986, when the political scene remained tense, amid a fragile post-Marcos democracy on the watch of President Corazon Aquino.

It was only a decade later, in 1996, when UP started indexing the documents, which its librarians have since referred to as the “Radical Papers.” They undertook this task with the help of scholars from Cornell University and the University of Wisconsin.

Among the library’s objectives in putting order in the Radical Papers is to make them accessible to students wishing to study those writings, which also serve to chronicle a particular time—the martial law era and the resistance to that rule.

Amalia Javier, head of UP’s special collection unit, said these materials covered the 1960s up to the late 1980s — in other words, the entire length of Marcos’ 20 years in power, as a democratically elected leader in 1965 until his long authoritarian period from 1972 to 1986.

One episode documented by the Radical Papers is the 1971 Diliman Commune, when UP students barricaded the university for more than a week in February, resisting dispersal attempts by the police.

Also among those files are books and pamphlets written by Communist Party of the Philippines founder Jose Maria Sison, as well as editions of the party’s news organ “Ang Bayan,” among others.

Former UP President Francisco Nemenzo Jr., whose tenure oversaw the gathering of the Radical Papers into a proper collection, once wrote that the documents were “bundled at random, with no attempt at classification … [that] it was not at all a pleasant chore to go over these materials [in] the sweltering heat of the Filipiniana Reading Room.”

UP deputy librarian Eimee Lagrama said it would take “a serious researcher [who was] dedicated enough to pore through the files.”

Nemenzo said those records had to be classified in order to establish the UP Library “as the unofficial archives of the political under[ground].”

“When radical groups know that it (the library) treats their publications with respect and makes them available to scholars, they will hopefully get into the habit of depositing … copies of their publications,” he wrote.

The UP Library has also begun digitalizing the Radical Papers, although this process has a long way to go.

Meanwhile, the library and other departments of UP are also involved in handsoffourlibraries.crd.co — a website dedicated to storing the country’s progressive literature on the internet.

But a quarter of a century after their endeavor to organize the Radical Papers, its custodians now fear that those volumes could be targeted by a new campaign of repression, reminiscent of the 1970s, or Red-tagged as the term goes today.

On Sept. 1, police and military agents “inspected” the Kalinga State University and took out books and documents on the peace negotiations between the government and the National Democratic Front of the Philippines.

The confiscation of those materials had the consent of the university’s chief librarian, Evangeline Cabello, who said this was meant to “protect [the students] from being recruited to join communist groups.”

The National Task Force to End Local Communist Armed Conflict said this was part of the government’s “whole-of-nation” approach in counterinsurgency.

But UP scholars described that campaign as a purge, which they also said was an affront to academic freedom and an attempt to militarize state libraries.

“When we assume that these materials can make rebels out of students because they found them in the library, it’s like saying these students cannot be discerning,” said Elvira Lapuz, the university librarian at UP Diliman. “To say that such materials can sway or influence them is oversimplifying.”

Lagrama agreed, saying: “[H]ow do you define subversive anyway? How can you fully understand why it is called subversive in the first place if you bar people from reading them?”

“We are not even in [a] position to identify materials as subversive,” she added. “Even if you tell us to remove this from the collection, it will be going against our mandate [to make our resources available to students].”

According to Javier, graduate students and researchers are usually the ones who ask to see the Radical Papers.

Indeed, as Lapuz noted, their value is more historical than revolutionary.