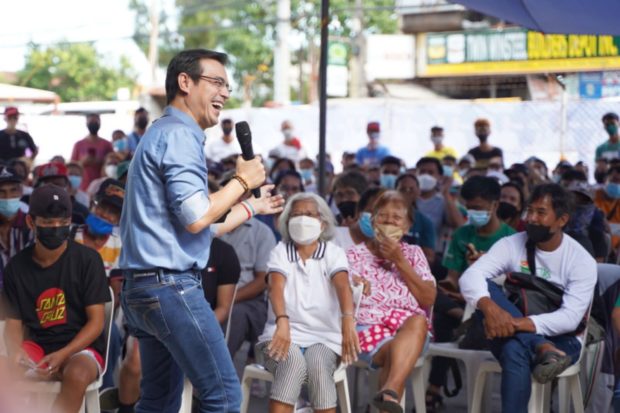 The Aksyon Demokratiko presidential bet made the pronouncement in a dialog with more than a thousand former informal settlers who were beneficiaries of housing units in PAR Homes 3, an in-city housing project in Barangay La Huerta, Parañaque City.

Moreno was referring to Tondominium 1 and 2 which are situated in Tondo, one of the most densely populated districts in the Philippine capital, and one of the world’s largest slums.

Set to be completed by the end of this year, the two residential buildings have a combined total of 336 two-bedroom apartment units, each with a size of 44 square meters.

Binondominium 1 and 2 meanwhile are set to be completed by January next year, while Basecommunity was completed last July.

The housing projects are all situated in the city’s slum areas to accommodate urban poor and informal settlers, and give them the advantage of remaining near their places of work and livelihood.

Besides more socialized housing programs, Moreno said his government would also embark on building more hospitals and more public-school buildings for the ordinary people, again similar to those he established in Manila which are modernized facilities complete with amenities like those found in private hospitals and schools.

Moreno said oil and electricity taxes would also be cut by half to cushion the socio-economic effects of the pandemic.

While this may cost the government in P130 billion in foregone revenue, Moreno said the twin tax cuts would bring immediate relief to ordinary Filipinos in the form of lower cost of food, lower transportation fares, and higher income, among others.