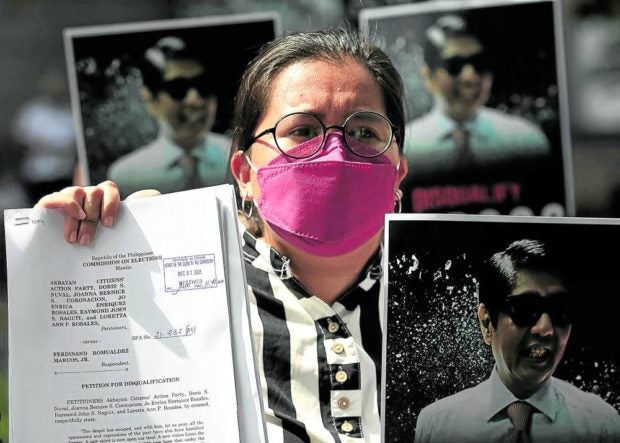 SEVENTH PETITION Leaders of Akbayan Partylist, along with other sectoral representatives and activists who suffered martial law atrocities during the Marcos dictatorship, file another disqualification case to derail the presidential candidacy of the late strongman’s son and namesake Ferdinand Marcos Jr., at the Commission on Elections office in Intramuros, Manila, on Thursday. —RICHARD A. REYES

Two more petitions opposing the presidential candidacy of Ferdinand Marcos Jr. were brought to the Commission on Elections (Comelec) on Thursday, including one filed by the supposed original officers and members of his adopted party, the Partido Federal ng Pilipinas (PFP), questioning his membership.

Another petition against the late president Ferdinand Marcos’ son and namesake concerning his 1995 tax evasion conviction was filed by the party list group Akbayan led by former Commission on Human Rights chair and martial law survivor Etta Rosales, along with other activist groups that had filed their own disqualification case against him.

Akbayan amplified the arguments made in two earlier petitions filed by other individuals and groups that fought the dictatorship: that Marcos Jr. was disqualified from seeking public office for life because he has been found guilty of tax offenses as a public official.

The latest petitioners also said Marcos Jr.’s conviction fell within the Comelec’s grounds for disqualification of candidates, because tax evasion was tantamount to a crime involving “moral turpitude” and he was convicted with finality for which he was sentenced to imprisonment of more than 18 months.

The petitions now number seven, including an earlier one by taxpayers seeking to intervene in support of the petition to cancel Marcos Jr.’s certificate of candidacy (COC) for supposedly falsely claiming eligibility to run; another that seeks to cancel his COC filed by another aspirant with the same surname; and another that wants him declared a “nuisance candidate.”

But Marcos Jr.’s camp remains focused, according to his spokesperson Victor Rodriguez.

“We respect the right of every disillusioned group to take whatever legal action they think would best serve their own agenda, so we also expect them to respect our right to be heard,” Rodriguez said in a statement

Claiming to be the true chair of the PFP, retired police general and National Commission on Muslim Filipinos Commissioner Abubakar Mangelen led the supposed original party members in denouncing the “unauthorized, unilateral, illegal and improper” issuance of a certificate of nomination and acceptance (Cona) to Marcos Jr., “who as records would show was never an officer or member of PFP.”

Mangelen said Marcos Jr.’s endorsement by “some officers of PFP came as a big shock and surprise” to him and a “substantial number of officers and members” of the party.

“As a matter of fact, the party officers from Lanao del Norte and other areas who were not consulted or notified of any meeting or convention complained of their replacement as officers without due process of law and in contravention of the PFP’s constitution and bylaws,” he said in the petition.

Mangelen said the Cona issued to Marcos Jr. “is unauthorized, defective, invalid and void,” and that the party’s endorsement of him as standard-bearer “is inoperative, void and nonexistent.”

As well, Mangelen said Marcos Jr. should be disqualified for “ineligibility” due to his conviction of “a crime involving moral turpitude.”

Per Comelec spokesperson James Jimenez, two petitions in favor of Marcos Jr. have been filed by the PFP and by South Cotabato Gov. Reynaldo Tamayo Jr. who stands as PFP president.

The Comelec’s second division required the parties to comment on these petitions. 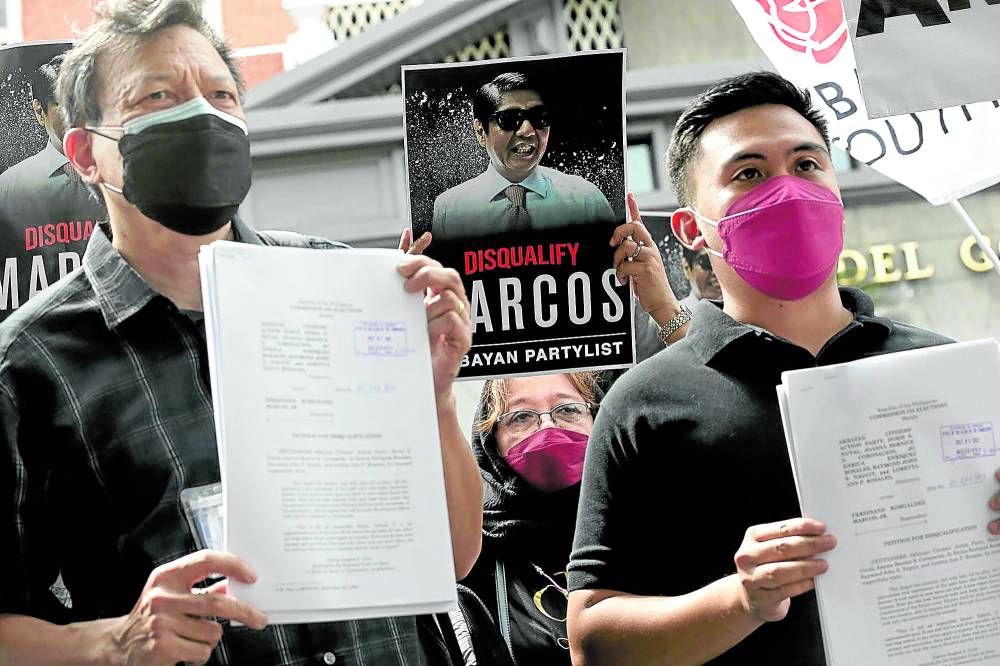 He filed an appeal at the Supreme Court but eventually withdrew it, and his conviction became final on Aug. 31, 2001. At the time, he was governor of Ilocos Norte, the post he also held from 1982 to 1985.

“To complete the picture, he was then the son of the ruling dictator, the same dictator who imposed the penalty of perpetual disqualification for all public officers who dare violate the National Internal Revenue Code of 1977. Perhaps he thought he was an exception to his father’s decrees,” Akbayan et al. said in their petition.

They said Marcos Jr.’s “repeated failure … for more than a decade to file his [ITRs] as a public officer was a series of continuing acts done contrary to justice, honesty, modesty or good morals that manifest baseness, vileness or depravity.”

They claimed that the appellate court’s decision to exclude the penalty of imprisonment of three years imposed by the Quezon City court for his failure to file his ITR for 1985 was “patently a mistake.”

“In fact, the Court of Appeals held that [he] failed to prove that he did not commit the crime of failure to file his [ITR] for the year 1985,” they said.

Section 254 of the 1977 National Internal Revenue Code requires the penalty of imprisonment in a conviction of failure to file an ITR, the petitioners added.

Rodriguez said the disqualification cases filed against Marcos Jr. were just part of the demolition job of “one group” who did not want the country to move forward.

He did not name the group. But earlier, he said the “yellows” should stop using the Comelec for their political propaganda to derail Marcos Jr.’s presidential run.

“Yellow” refers to the political color of Vice President Leni Robredo’s Liberal Party, which she chairs.

Rodriguez said that despite the disqualification cases, Marcos Jr. and his running mate Davao City Mayor Sara Duterte would continue to focus on uniting the country and working for economic recovery. —With a report from Nestor Corrales