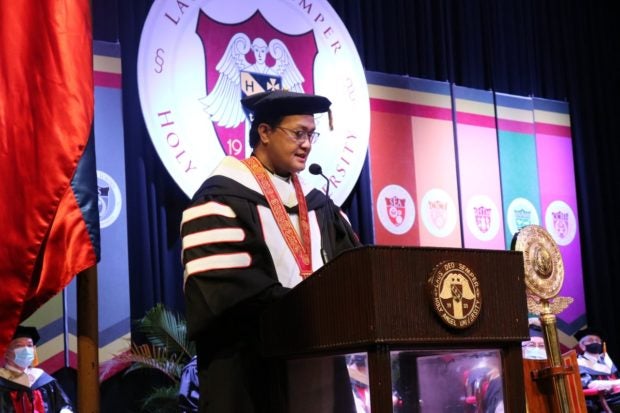 MANILA, Philippines — Newly-installed Catholic Bishops Conference of the Philippines (CBCP) president Bishop Pablo Virgilio David on Wednesday drew parallels between historic events in 1986 and now, when two widows faced what appeared to be insurmountable foes of their time, and both of the same appellation — Marcos.

Speaking before students of the Holy Angel University in Angeles City, Pampanga, where he was conferred an honorary doctorate degree for humanities (honoris causa), David warned that the public must not be “seduced by troll propaganda” that urge the Filipino people to move on from the atrocities committed during the Marcos regime.

“There is no sense in looking back to the past, except to understand who we are in the present, why we are who we are, why we behave the way we do. There is something very wrong about the attitude of escapism that is becoming prevalent today, especially among fellow Filipinos who are seduced by troll propaganda in the social media, those who say ‘The past is past. Let us just forget it and move on or move forward,'” he said.

“It is a good idea but it is wrong. Who wants to get stuck in the past anyway? It is precisely because we do not want our past mistakes to keep repeating themselves that we need to refresh the past properly in our memory,” he added.

The Catholic Church leader also cited an old adage about history repeating itself, noting that the current political showdown between Vice President Leni Robredo and Ferdinand “Bongbong” Marcos Jr. would mirror the events that took place more than 30 years ago, between another widow, the late former President Corazon Aquino and Marcos’ father, the late strongman and namesake, Marcos Sr.

“Whoever thought that a widow challenging Marcos in 1986, would repeat itself?” said David.

Aquino is the widow of the late Senator Benigno Aquino Jr., who was gunned down on August 21, 1983 in the tarmac of the then Manila International Airport upon his return from exile in the United States. His death sparked the events that culminated in the ouster of the Marcoses in Malacañang through the People Power revolution in 1986.

On the other hand, Robredo is the widow of the late Jesse Robredo, former Secretary of the Department of Interior and Local Government during the term of the Aquinos’ son, the late former President Benigno S. Aquino III.

Both Robredo and Marcos Jr. are aspiring for the presidential seat in the 2022 elections.

David said that while “the past is past,” totally forgetting about it and moving on would allow the “ghost of the past (to) continue to haunt us in the present.”

“We remain in that dark and perpetual state of victimhood that deprives us of a future, because we do not know how to review the past in a manner that lights up our path in the present for the future,” he further said.