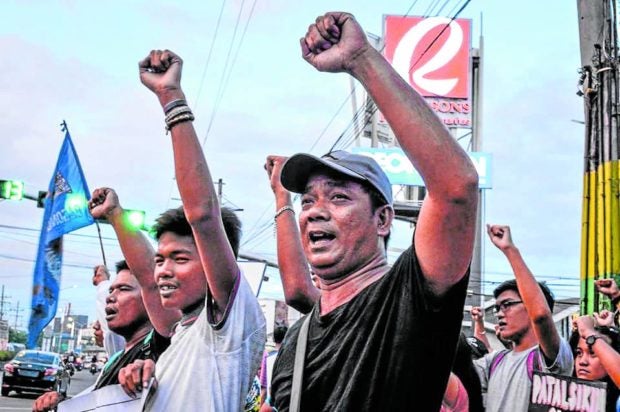 MANILA, Philippines — A complaint for murder has been filed against 17 policemen over the March 7, 2021, killing of labor leader Emmanuel “Manny” Asuncion in Cavite province on the recommendation of the Department of Justice (DOJ).

The prosecutors’ office in Cavite has set the preliminary investigation for January.

“In the case of the death of Asuncion, the AO 35 Special Investigating Team (SIT) has recommended the filing of murder charges against certain law enforcement agents involved in the incident,” Justice Secretary Menardo Guevarra said in a Viber message.

AO 35 refers to Administrative Order No. 35 that created an inter-agency task force headed by the DOJ to investigate the killings.

Asuncion, the provincial coordinator of Bagong Alyansang Makabayan (Bayan), was one of nine activists slain when policemen and soldiers simultaneously raided their homes in the Calabarzon region on March 7. Six activists in Rizal province and two more in Batangas were also killed in what militant groups then denounced as the “Bloody Sunday” raids.

The complaint was filed with the Office of the City Prosecutor in Dasmariñas City, with Asuncion’s wife Liezl as the complainant.

In a two-page order dated Nov. 22, investigating prosecutor Rogelio Radoc Jr. directed the 17 policemen to attend the preliminary hearings on Jan. 11 and 25, 2022.

It was the first complaint to be filed against the officers who conducted the raids authorized by two Metro Manila judges to recover loose firearms and explosives.

The violent outcome of the operations later prompted the Supreme Court to clip the power of judges to issue search warrants outside of their jurisdiction.

Guevarra said the SIT was expected to release the results of its separate investigation of the killing of fisherfolk couple Ariel and Chai Evangelista in their home in Nasugbu, Batangas, in the coming weeks.

The National Bureau of Investigation, he added, was winding up its interview of the witnesses in the couple’s killing.

The secretary, however, said the SIT’s investigation did not cover the killing of Dumagat farmer cousins Randy and Puroy dela Cruz in their home in Tanay, Rizal, “as no cause-oriented connection was established.”

Militant groups welcomed the filing of complaint in the Asuncion case, but also called on the DOJ to file similar charges against the police over the killing of the eight others: the Evangelista couple; the Dela Cruz cousins; and peasant leaders Melvin Dasigao, Mark Bacasno, brothers Abner and Edward Esto.