A crowd of people in Bayugan City awaits the distribution of cash and food aid from Sen. Manny Pacquiao during a sortie Tuesday in Agusan del Sur. Photo by Chris V. Panganiban

BAYUGAN CITY, Agusan del Sur—Naomi Pio, 52, a polio victim, was among the thousands waiting on Tuesday afternoon for Senator Manny Pacquiao at the covered court of Maygatasan village in this city.

Together with her husband Carlito, who pushes her wheelchair, she braved the rough road aboard a hired tricycle from nearby Bucac village–over three kilometers away–so she could line up for P1,000 and a food pack containing five kilos of rice and dressed chicken.

As Naomi was called to claim her bounty, Pacquiao also gave P1,000 to Carlito, a laborer at a local mine, seeing him pushing her wheelchair.

“I was so dumbfounded when I met Pacquiao that I could not remember what he whispered to me,” Naomi, speaking in Bisaya, said of her experience meeting the boxing superstar.

She said she and her husband had been long-time fans of the eight-division world champion that she once fainted with seeing him being hit by the strong punch of a Mexican fighter.

Pacquiao showered cash and food ‘ayuda’ to some 4,000 people who waited to see him in Butuan City, Agusan del Norte on Monday, and San Francisco town and Bayugan City in Agusan del Sur on Tuesday.

His local coordinators preferred persons with disabilities and the elderly as the primary recipients, distributing claim coupons upon registration two days earlier.

But on Tuesday, many of those who trooped to the venues in Bayugan and San Francisco went home empty-handed as more people came than what the Pacquiao team prepared.

A broadcast blitz over local FM stations about Pacquiao’s visit had drawn throngs of people to the two venues. Some went to the venues as early as 10 p.m. the night before, hoping they would be on the list of recipients. 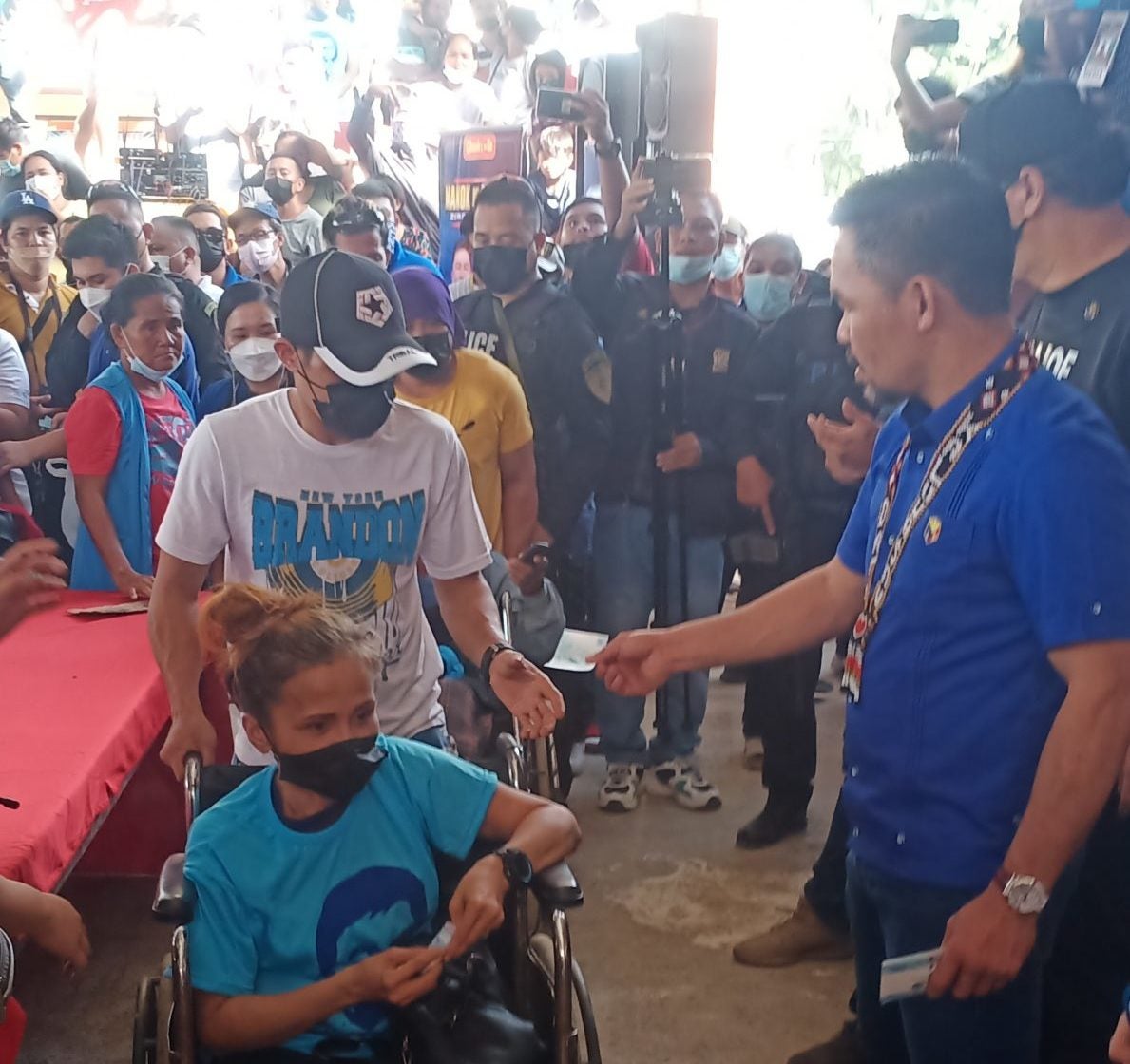 Sen. Manny Pacquiao hands a P1,000-bill to Carlito Pio, who accompanied his wife, a polio victim, to meet him in Bayugan City on Tuesday. Photo by Chris V. Panganiban

To remedy the situation, Pacquiao’s local coordinators assured those with no coupons that they would receive P500 each, only to end up with P200 as the senator’s staff had run out of cash.

To ease the embarrassment of many others who had nothing to bring home, the Pacquiao team distributed forms to write their names, contact numbers, and concerns, such as a job or a house for the homeless. The information, they said, would be filed in a databank with a promise that these would be realized when Pacquiao wins the presidency in 2022.

Pacquiao defended the ‘ayuda’ distribution saying he did not intend it to woo voters for his presidential candidacy. He had been doing this since 2005, even when he was not yet a politician, he added.

The senator, who has retired from professional boxing for a presidential bid, assured the people that when elected, he would lift the economic condition of the poor by jailing corrupt politicians and ending the culture of fraud in the government bureaucracy.

“Every year, we lose P1 trillion because the hard-earned tax money from ordinary citizens is siphoned off by politicians who enrich themselves. If we could put them in jail and recover at least P500 billion every year, there would be no more poor Filipinos within my six-year presidency,” he told the crowd in Bayugan City.