This was President Rodrigo Duterte’s remark last Oct. 22 as he hailed the National Task Force to End Local Communist Armed Conflict (NTF-Elcac) for what Duterte said was its achievements in the counterinsurgency war in the Philippines.

In 2018, just two years into his reign, Duterte issued Executive Order No. 70 calling for a whole-of-nation plan to end the 52-year-old rebellion in the countryside by 2022, his last year in office. The EO also created NTF-Elcac, which has become controversial since.

Since its inception, NTF-Elcac, headed by Duterte himself, has been credited by the government for its role in supposedly reducing the strength of New People’s Army (NPA), the armed wing of Communist Party of the Philippines (CPP).

On Nov. 29, Defense Undersecretary Reynaldo Mapagu listed what he said were achievements in counterinsurgency that have been met since Duterte became president in 2016. Mapagu said 20,579 insurgents had surrendered since—5,262 NPA fighters, 3,414 communist militia members, 7,626 supporters and 2,224 cadres.

NTF-Elcac, however, sank into controversy and was denounced for a “systemic policy that includes harassment and attacks against anyone perceived to be left-leaning or critical of the government,” said lawyer Neri Colmenares, former Bayan Muna representative and currently senatorial aspirant.

The human rights group Karapatan said the whole-of-nation strategy that NTF-Elcac represents involved the merger of military and civilian tasks but with still a “predominantly militarist approach” that makes no distinction between civilians and combatants. 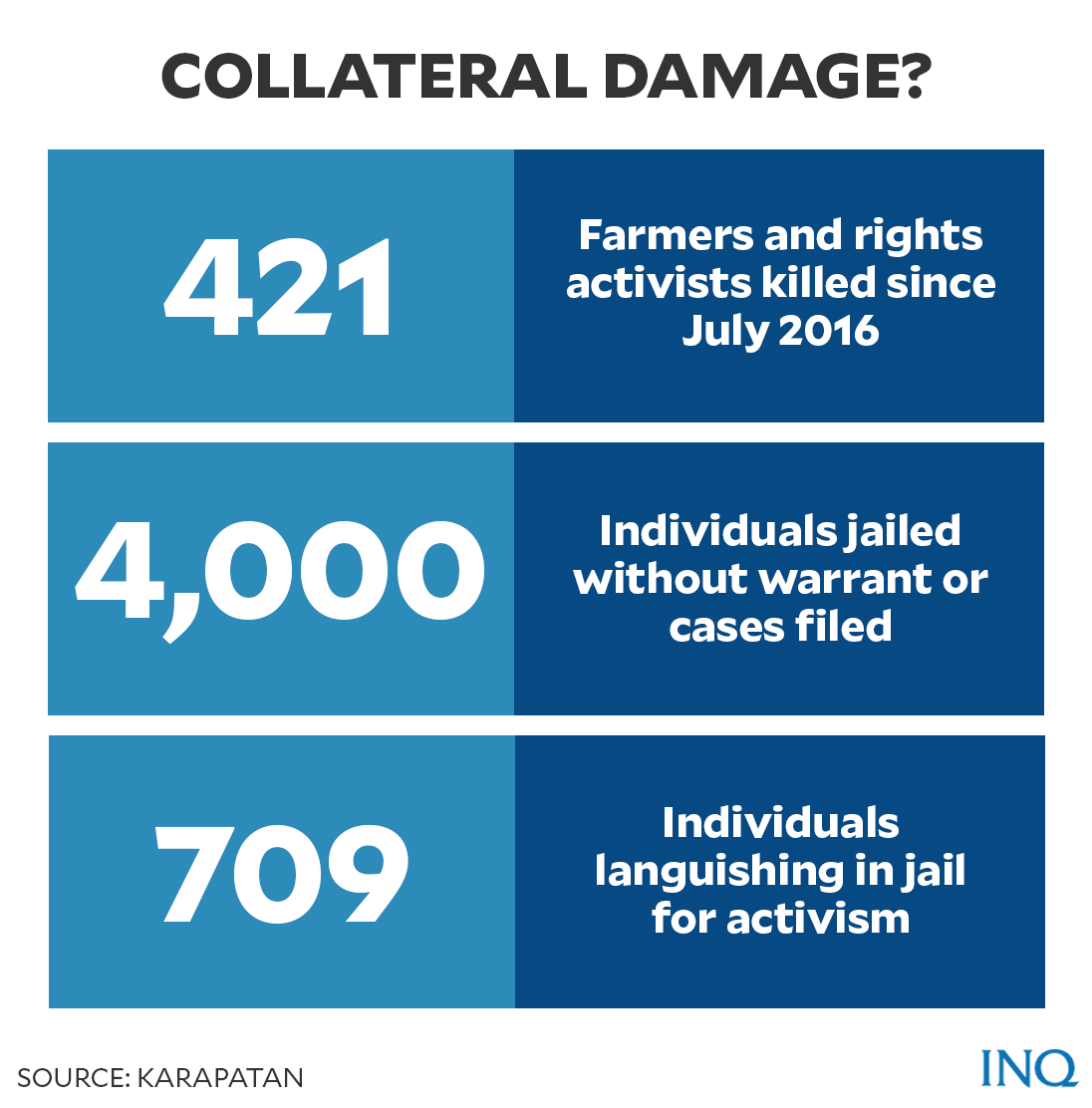 This policy, Karapatan said, has resulted in the killing of 421 civilians and noncombatants—327 farmers and 215 activists. At least 4,000 people had been illegally or arbitrarily jailed with the use of fabricated charges. At least 709 people are still in jail because of activism.

In the proposed 2022 National Expenditure Program, NTF-Elcac wants a budget of P28.12 billion. The Senate, however, cut it by 86 percent, or P24 billion, because of the alleged misuse of its P19.33 billion budget in 2021. 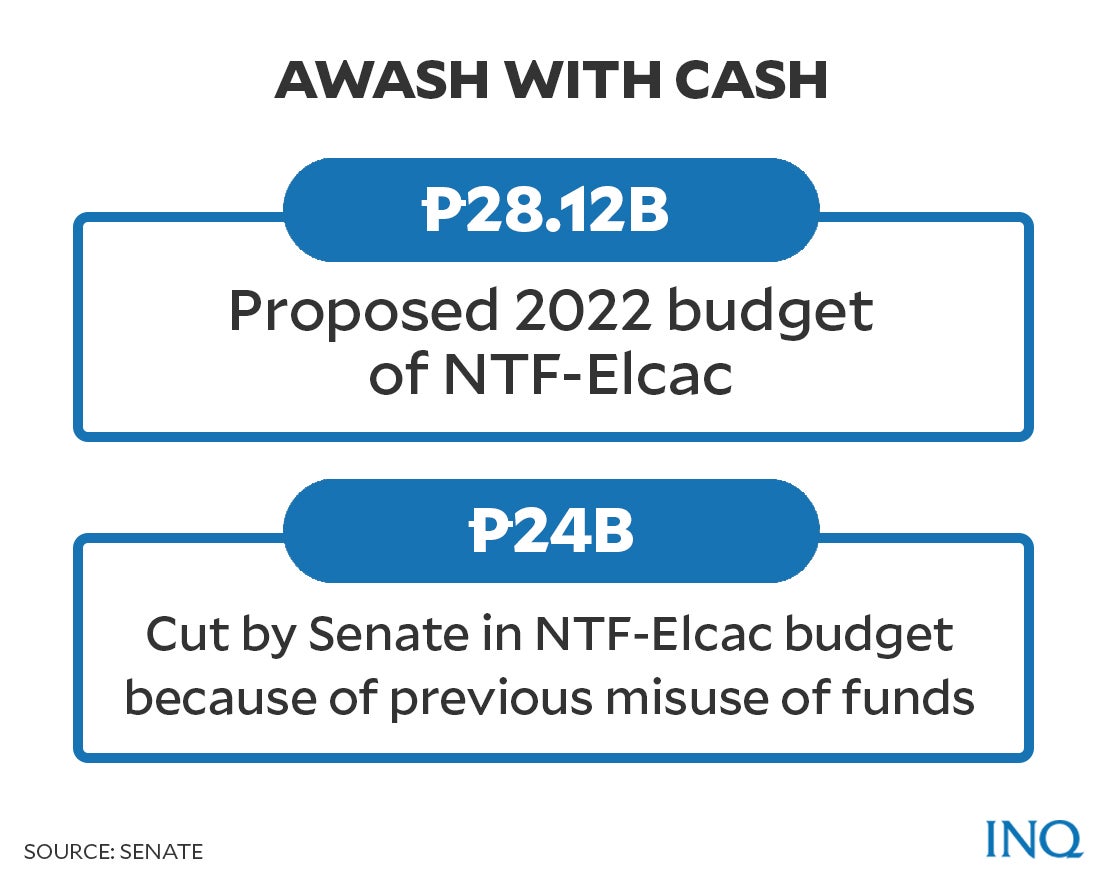 As the Philippines will have a new president in 2022, will the NTF-Elcac still exist? How will the new administration address the insurgency? Here’s what presidential aspirants are saying:

De Guzman branded the actions and policies of NTF-Elcac as a clone of martial law counterinsurgency strategies under the late dictator Ferdinand Marcos. NTF-Elcac should be abolished.

“The armed conflict in the country will not end but will be exacerbated by a militarist solution. The steps towards true and complete peace are comprehensive programs that eradicate poverty and exploitation, respect human rights and enforce social justice,” he said.

De Guzman said the operations of NTF-Elcac were clearly a violation of the 1998 Comprehensive Agreement on Respect of Human Rights and International Humanitarian Law signed by the government and National Democratic Front of the Philippines, the umbrella organization of rebel groups.

Lacson, who once defended NTF-Elcac at the Senate, said last Nov. 9 that amid allegations of how the office “misused” its resources, he supported the slash in its proposed 2022 budget.

“That being said, not only do I support the slash in the NTF-Elcac’s proposed budget for 2022, if such misuse was indeed committed—the officials concerned must be made accountable, if not criminally liable,” he said,

Lacson also said he regretted backing the agency’s budget, saying that what it was asking for in 2022 was a “bit too much”. He also said in August that the resources were being “misused” by the PNP which later denied the allegation.

In May, as the NTF-Elcac retained retired Gen. Antonio Parlade as its spokesperson despite red-tagging cases, Lacson said he was no longer “enthusiastic” to defend its budget.

Marcos, the son of the late dictator who waged a losing war against communist rebels, said on Nov. 11 that he felt saddened by the Senate decision to cut the NTF-Elcac budget.

“It is regrettable that the good things that the agency started may be put to waste. We need enough funds to suppress insurgency which we have been fighting for five decades,” he said.

He said the government should give priority to fighting rebellion.

Last Nov. 15, Moreno, who had been a victim of Parlade’s tirades when the mayor ordered posters declaring communist rebels as persona non grata in Manila, said ending the insurgency would require jobs and delivery of basic services.

“The insurgency, it boils down to livelihood. If people don’t have a livelihood, they are forced to the wall. I think if people have a livelihood, access to education, better health care, nobody in his right mind will go against the government,” he said.

Moreno said “that’s the way to do it,” stressing that there’s a need to give Filipinos opportunities, especially the poor. This, he said, is in his Bilis Kilos 10-Point Agenda for Governance.

Pacquiao has not made any new comment yet on the NTF-Elcac, but he said last Feb. 27 that “widespread corruption” in the Philippine government should be blamed for the insurgency.

“Our lumad are not being given support because of widespread corruption. Funds that should be used for constructing schools, roads and provision of livelihood go to corrupt and greedy politicians,” he said.

He said all corrupt officials should be removed so that rebels would go back to the folds of the law.

Robredo said last Nov. 29 that if she gets elected, she would discard NTF-Elcac, saying that she feared there would be abuses like in the government’s war on drugs.

Last Nov. 27, however, after a meeting with former top military brass, Robredo said she supported the task force mandate to fight insurgents, saying the problem with NTF-Elcac really boiled down to the “careless statements of its members.”

“I’ve been on the receiving end of unfair accusations. I’ve been red-tagged and the red-tagging has been baseless. I am one with you in the challenge of defeating the insurgency problem by addressing the core of these problems, and the peripheral issues surrounding it,” she said.