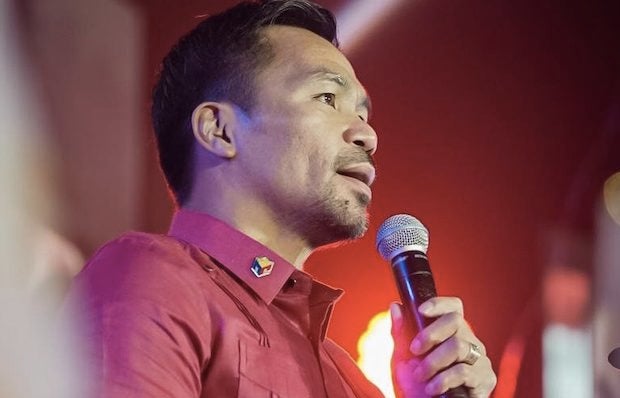 MANILA, Philippines — Presidential aspirant Sen. Manny Pacquiao and his running mate House Deputy Speaker Lito Atienza paid separate tribute to Andres Bonifacio, the father of the Philippine Revolution against Spain, to commemorate the hero’s 158th birthday on Tuesday, but both voiced the same sentiment that the country would need a hero to carry on the fight against corruption, poverty, and abuse of power.

While Pacquiao led a motorcade through the town of San Francisco in Agusan Del Sur before distributing relief packs and cash aid, Atienza led the wreath-laying rites at the Bonifacio Monument in Tutuban, Manila, along with officials of the National Historical Commission of the Philippines (NHCP).

Speaking before a large crowd at the Barangay Uno covered court in San Francisco, Pacquaio said that the biggest enemy of Filipinos were no longer the foreign invaders who sought to subjugate Filipinos but the culture of corruption that had pervaded all levels of the government.

According to Pacquiao, commemorating Bonifacio’s birthday should not just remind Filipinos of his heroism and his act of sacrifice to free Filipinos from colonial occupation but it should also inspire them to serve the people.

“This day is very important because there are so many lessons of history that we have to put in our hearts and minds as we remember the Supremo who offered his life for the country,” Pacquiao said in Filipino.

“If during his time he fought for Filipinos against foreign colonizers, our country faces a different fight today — poverty, widespread corruption, and relentless abuse by those in power. May the heroism of Bonifacio serve as our guide in our ardent but peaceful war against poverty and corrupt governance,” he went on.

“You don’t have to die to be a hero. You can show your heroism while you’re alive. Serving the country is enough. Any one of us can be a hero. Whatever you’re doing for the country, small or big, what’s important is that it’s straight from your heart,” he added.

After his “Trabaho, Pabahay at Ayuda” caravan where he provided relief packs and 1,000 cash for Manobo natives, farmers, and small-scale loggers in San Francisco, Pacquiao proceeded to the town of Bayugan, Agusan del Sur to wrap up the first round of his five-day sortie in the Caraga Region. 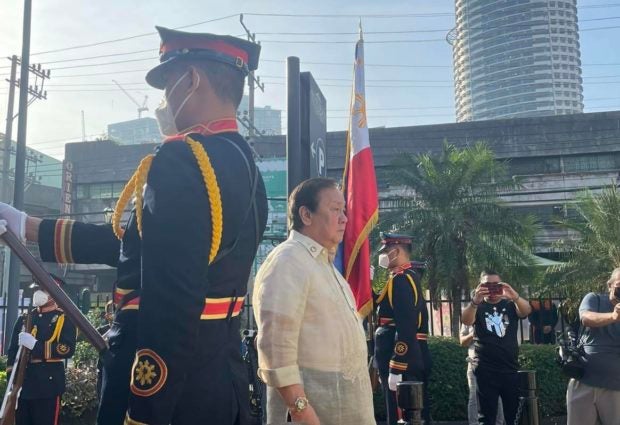 House Deputy Speaker Lito Atienza paid a separate tribute at the Bonifacio Monement in Tutuban in Manila on National Heroes’ Day on Nov. 30, 2021. (Photo from his office)

In Tutuban, Atienza likened Bonifacio to Pacquiao who was also born poor and unable to study but emerged to become a living hero and a major influencer of all Filipinos.

“More than a century has passed, and yet the torch of Andres Bonifacio remains in our hearts and our minds,” Atienza said in Filipino.

“We must fight for the wish of Andres Bonifacio for Filipino to live well in this world. That’s also the dream of our Sen. Manny Pacquiao — to free our country from the chains of poverty. The cause of this is the same as the cause of the poverty of Filipino in the past century. That is the greed, abuse, and cruelty of some people who wield power,” he added.