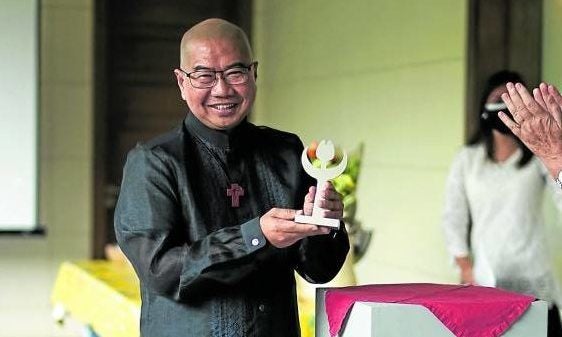 MANILA, Philippines — A Filipino Catholic priest, who in 2019 was charged with sedition by the Duterte administration, has earned recognition from the Dutch government for his work as a human rights defender, especially in line with his initiatives for families who had lost loved ones to extrajudicial killings (EJKs) being linked to the government’s controversial war on drugs.

Fr. Flaviano “Flavie” Villanueva, a missionary from the Society of the Divine Word (SVD), received the Human Rights Tulip Award from government of the Netherlands. He was the first Filipino to earn the honor, which was conferred through the Dutch Ministry of Foreign Affairs on Nov. 24.

“The Human Rights Tulip is intended to support human rights defenders and provide them with a platform and visibility, and is awarded annually on December 10, Human Rights Day, at the Hague,” the Dutch embassy in Manila said in a statement.

“[W]e are extremely proud to award the first Tulip Award to a Filipino human rights defender, Fr. Flaviano Villanueva, on occasion of the 70th year of diplomatic relations between the Philippines and the Netherlands,” it added.

According to the embassy, Villanueva was recognized for his work as cofounder of the Paghilom (healing) program, a Church-based support group that works with families of victims of EJKs to allow them to find a safe space to cope with grief and connect with others who share their experiences.

The program is a vital component of the Arnold Janssen Kalinga Center, a foundation that Villanueva also founded. The priest, the coordinator of the SVD’s Justice, Peace and Integrity of Creation Office, launched Paghilom in 2016 to help drug war widows and orphans, and people whom he described as being “at the peripheries of economy and faith.”

Paghilom is supported by human rights watchdogs and private groups that help Villanueva in providing food and health care, legal assistance, spirituality, education, and livelihood for the bereaved families. It seeks to provide them with the tools to rebuild their lives after also being stigmatized by the drug war and left without any means to move on.

In a phone interview with the Inquirer on Tuesday, Villanueva said he dedicated the award to the memory of the thousands EJK victims and their families, as well as to the organizations who have been helping him defend the rights of the “marginalized, oppressed, sick and tormented.”

“I received it on behalf of the widows and orphans who are struggling to rise from the ashes and seek both healing and justice,” he said.

While he feels grateful for the recognition, the priest said “I wish there was no need for the award. You see, I received the award because I helped people, particularly victims of injustices… Their loved ones, their breadwinners were killed, so it’s actually sad to get such an award (as) a consequence of the killings,” he added.

In March 2019, Villanueva, along with some other Church leaders, came out in the media to reveal the death threats he had been receiving apparently for being critical of Mr. Duterte’s antinarcotics campaign.

He was also one of the men of the cloth accused of conspiring to commit sedition based on the viral “Bikoy” videos that surfaced linking President Rodrigo Duterte and members of his family to the illegal drug trade.

While the Department of Justice eventually cleared several members of Catholic clergy, including bishops, the cases against Villanueva and another priest, Fr. Albert Alejo, still stand.

From over 70 candidates from around the world, Villanueva was among the 10 shortlisted for the Tulip Award, according to the Dutch Embassy.

“Tulip is a flower of hope for the Netherlands. It has deep spirituality that calls people who received it to discern about the truth so that we can continue to be carrier of the flower and the message that it carries to others,” Villanueva said.

Given by the Dutch government since 2008, the award honors courageous individuals or groups that promote human rights peacefully and in innovative ways. The winner receives a tulip-shaped bronze statuette designed by Dutch artists Huub and Adelheid Kortekaas, and prize money of €100,000 to be used to fund the human rights defender’s work, particularly the conduct of training programs.

In 2015, it was awarded to the Initiative for the Resurgence of the Abolitionist Movement in Mauritania, an organization working to abolish slavery. In 2014, it went to Mideast Youth, a group that builds online platforms for rights advocates.