Ghislaine Maxwell portrayed both as scapegoat, predator as trial gets under way 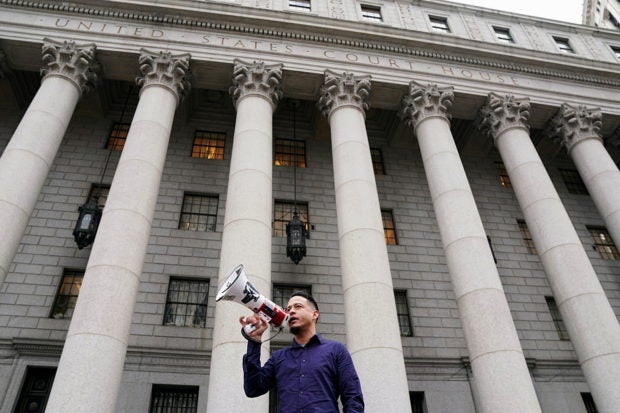 A protester stands outside the court on the first day of the Ghislaine Maxwell trial in the Manhattan borough of New York City, New York, U.S., November 29, 2021. REUTERS

NEW YORK — Ghislaine Maxwell’s criminal trial got under way on Monday, with a prosecutor saying the British socialite lured underage girls for the late financier Jeffrey Epstein to sexually abuse, while a defense lawyer urged jurors not to turn Maxwell into a scapegoat.

“She preyed on vulnerable young girls, manipulated them, and served them up to be sexually abused,” Assistant District Attorney Lara Pomerantz said in her opening statement.

Maxwell, 59, is on trial for recruiting and grooming four underage girls for Epstein to abuse between 1994 and 2004. Epstein died in jail in 2019 while awaiting trial on sex-abuse charges.

She has pleaded not guilty to eight charges of sex trafficking and other crimes, including two counts of perjury that will be tried at a later date.

Maxwell faces up to 80 years in prison if convicted.

“The charges against Ghislaine Maxwell are for things that Jeffrey Epstein did, but she is not Jeffrey Epstein,” Maxwell’s lawyer, Bobbi Sternheim, said in Manhattan federal court.

The trial comes in the wake of the #MeToo movement, which has encouraged victims of sexual abuse to speak out against powerful men such as movie producer Harvey Weinstein and R&B singer R. Kelly accused of misconduct. Maxwell’s case stands out in part because she is a woman.

Pomerantz began by describing how Maxwell and Epstein met a 14-year old girl named Jane – a pseudonym – at an arts summer camp in 1994. Epstein introduced himself as a donor interested in giving scholarships to talented youth and asked for Jane’s phone number, Pomerantz said.

“Within that first year, when Jane was just 14 years old, Epstein started sexually abusing Jane. He did not abuse her alone,” she said. “Jane was not their only victim. There were other young girls.”

Maxwell sat in the well of the courtroom, a white mask covering her face amid the COVID-19 pandemic. She wore a cream-colored sweater and black pants.

The government’s first witness, Lawrence Paul Visoski Jr, a pilot for Epstein, testified that Maxwell sometimes notified him about Epstein’s upcoming travel plans. Visoski described Maxwell as “one of the assistants in the office for Mr. Epstein.”

Four accusers are expected to testify against Maxwell at the trial, which is expected to last until at least early January. Prosecutors said other witnesses will include family members of the accusers and former Epstein employees.

Sternheim said prosecutors, unable to convict Epstein, are using the daughter of late British media magnate Robert Maxwell as a scapegoat https://www.reuters.com/world/maxwell-challenge-accusers-seek-distance-epstein-sex-abuse-trial-2021-11-23. She said the government was asking jurors to ascribe a “sinister” motive to legal activities such as taking teenagers shopping.

She told jurors that the memories of Maxwell’s accusers had been “manipulated” by lawyers who encouraged them to sue Maxwell and Epstein for damages.

A compensation fund set up after Epstein’s death has been paying claims of accusers from the financier’s estate. Sternheim said Maxwell’s accusers received payouts and that their claims were “enhanced” by cooperating with the government.

“This case is about memory, manipulation and money,” Sternheim said. “Memories fade over time, and in this case you will learn that not only have memories faded, but they have been contaminated by outside information.”

After testimony concluded for the day, Maxwell embraced her defense lawyers.