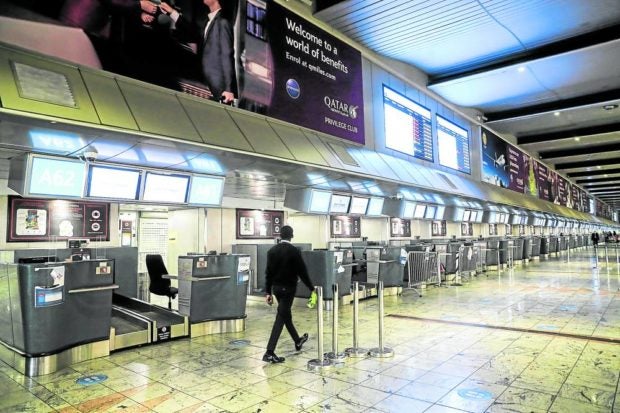 MANILA, Philippines — The government has temporarily suspended a decision to allow the entry of fully vaccinated tourists in a bid to prevent a new, heavily mutated coronavirus variant from entering the country as most of the population remains unvaccinated.

So far, the Philippines has not reported any cases of the Omicron strain, which was first detected in South Africa in mid-November and has since spread around the globe.

The government announced plans last Nov. 25 to allow fully vaccinated tourists from most countries to enter starting Dec. 1 as it seeks to revive the battered economy.

But the Inter-Agency Task Force for the Management of Emerging Infectious Diseases (IATF) reversed course over the weekend as it also announced the suspension of flights from seven European countries, in addition to an earlier ban on arrivals from several African nations.

“The IATF deemed it necessary to suspend the entry of foreign tourists, given worldwide concerns over the Omicron variant,” Immigration Commissioner Jaime Morente said on Monday.

Covered by the ban are vaccinated foreigners from “green list” and other nonvisa countries, or nationals of 157 states who, in accordance with Executive Order No. 408, are allowed to enter the Philippines without a visa for an initial stay of 30 days. For instance, Brazilians and Israelis can stay in the Philippines visa-free up to 59 days while those coming from India, Hong Kong, Macau and China can stay visa-free from seven to 21 days, depending if they have return tickets or visas issued by other countries, and comply with other requirements.

In his press briefing on Monday, Cabinet Secretary Karlo Nograles, acting presidential spokesperson, said the suspension was only temporary, but did not provide a duration.

The IATF earlier placed 14 countries under the “red list” barring all inbound foreign travelers. Filipinos coming from those countries through repatriation and mercy flights will be allowed entry but must undergo testing and quarantine.

Those already in transit and coming from the red list countries who will arrive in the Philippines before 12:01 a.m. of Nov. 30 will be allowed entry but will undergo a 14-day facility quarantine with testing on the seventh day.

Those who arrived in the country prior to Nov. 28 must undergo testing, quarantine and monitoring for symptoms.

Nograles also clarified that the IATF would not automatically place under the red list a country or territory where Omicron variant cases have been reported.

The main consideration for red-listing, he said, was the detection of local cases or local transmission in foreign countries.

He added that in the case of Hong Kong and other countries, the Omicron infections were “imported,” or brought by travelers who had come from other countries and tested positive upon arrival or while under quarantine.

“If the case is imported, we will check if they (authorities) have intensified or are doing well in their quarantine and testing protocols. If we see and are confident in the quarantine and testing protocols of that country or territory, then we will not red-list it unless we can see that there is a high probability that they have missed out a local transmission of Omicron,” Nograles said.

The secretary said the green or yellow listing could also be overridden by the IATF and its experts if they were “not that confident” in a country or territory’s surveillance activities, genome sequencing and detection of local cases.

The government has eased virus restrictions in recent weeks as the daily infection rate hovered at the lowest level since the beginning of the year and the nationwide vaccination rate increased.

But the emergence of Omicron has raised fears that quarantine restrictions could be reimposed.

Around a third of the country’s 110 million people are fully vaccinated. The Philippines has recorded more than 2.8 million infections since the start of the pandemic, including over 48,000 deaths.

The temporary travel ban is a major blow to tourism operators, which have been devastated by a plunge in international visitors and restrictions on domestic travel since borders were shut in March 2020.

Tourism is a major driver of the country’s economy, accounting for nearly 13 percent of gross domestic product in 2019, when more than eight million people visited, official data showed.

That slumped to 5.4 percent last year as tourist arrivals plummeted 82 percent to 1.48 million.