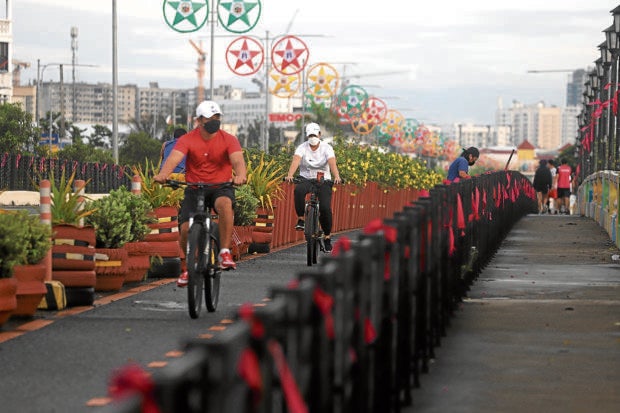 CYCLE HERE Iloilo City, which has extensive bike lanes, won on Nov. 25 and Nov. 26 two awards as the most bicycle-friendly city in the country, cementing its distinction as a haven for cyclists. —PHOTO COURTESY OF ILOILO CITY MAYOR’S OFFICE

ILOILO CITY, Iloilo, Philippines — This city has cemented its status as the bike capital of the country after winning two major awards last week.

The city bagged the gold award during the virtual awarding of the government-initiated National Bike Day, Bike Lane Awards 2021 held on Nov. 26.

“[The Bike Lane Awards recognizes] exemplary efforts of the local government units [that] have pushed for active transportation through the establishment of new infrastructure and the implementation of various support programs in the last two years,” said Assistant Secretary for Road Transport and Infrastructure Mark Steven Pastor in a statement.

The National Bike Day, Bike Lane Awards also recognizes the effort of the local governments in putting up “a more inclusive and sustainable road infrastructure network that caters to the needs of all road users.”

On Nov. 25, Iloilo City was also named the country’s most bicycle-friendly city during the Mobility Awards 2021.

It was also supported by the League of Cities of the Philippines and 27 regional partners composed of civic groups and active mobility advocates across the country.

“I believe that bike lanes contribute more space on the road and create the feeling of safety for many people who would like to bike. We look forward to having more safe, open spaces for the Ilonggos,” said Iloilo Mayor Jerry Treñas in a message, accepting the award.

Iloilo City has become a haven for bike enthusiasts with the continued putting up of bike lanes and the holding of bike festivals.

The city has existing and being developed bike lanes totaling 32 kilometers, including an 11-km network along Sen. Benigno Aquino Jr. Avenue and Iloilo River Esplanade, the 8-km University Loop, a circuit connecting six universities in the City Proper District.

The target is to connect the City Hall, provincial capitol, parks, schools, malls, groceries, markets, churches and other busy establishments through the bike lanes.

The city also has an ordinance that requires buildings to install bicycle racks.