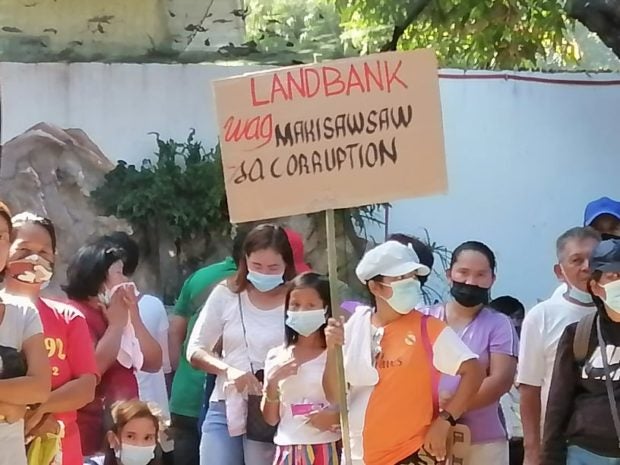 Residents in Sual town, Pangasinan province stage a rally on Monday to protest the planned P500 million bank loan made by the municipal government, which they said would sink the town deeper into debt in the next 15 years due to the annual five percent interest. (Photo by Yolanda Sotelo)

SUAL, Pangasinan — Around 2,000 residents here on Monday took to streets to oppose the planned loan of the municipal government from the Land Bank of the Philippines (LBP) amounting to P500 million.

Janet Toreno, one of the protesters, said the loan would sink the town deeper into debt in the next 15 years since it has an annual five percent interest.

The P500 million loan has a 4-percent annual interest, which is equivalent to P20 million until December 2022 but the annual interest for the following years was not specified in the letter of LBP to Mayor Liseldo Calugay.

“If the interest is 4 percent after December 2022, the loan which is payable in 15 years, would have a total interest of P325 million. What would the local government do to pay the loan? Tax the peanut vendors?” Toreno told the Inquirer.

Toreno said there is no need to borrow money from the bank because the municipal government has an unspent P595 million budget in 2019 that could be used for the projects.

She said the money was not used because the municipal council then did not pass a budget ordinance that year and there were no projects implemented in 2020.

Another resident, Leward Caburao, also questioned the need to acquire a loan because the municipal government is still awash with money.

The P500 million loan is supposed to be used for various infrastructure projects and purchase of multi-purpose vehicles, an ordinance approving and ratifying the loan agreement between the local government unit and the LBP, showed. The ordinance was passed on January 13, 2021.

Another resident filed a case for declaration of nullity of the ordinance for the loan agreement, with preliminary injunction and issuance of a temporary restraining order.

Complainant Michael Abata of Baybay Sur village said he filed the case against the municipal officials of Sual, “to prevent them from wasting public funds through the enforcement of an invalid or unconstitutional ordinance resulting (in) the damage and prejudice of the taxpayers of Sual, Pangasinan.”

The case was filed on Nov. 26 against several top officials of the town and the LBP.

The complaint said since there are 11 Provincial Board members, the required number of majority should be seven but only six members concurred in the approval of the ordinance.

“The approval was seemingly valid but not legally correct, and the endorsement to the Office of the Municipal Mayor for approval was improper. Knowing its invalidity, the mayor acted in bad faith upon it. If he had not known its invalidity, his lack of knowledge or ignorance does not excuse him,” Abata said.

He added that the LGU has no authority to enter into a loan agreement with LBP, but “despite the invalidity of the ordinance and the lack of legal authority of the mayor, LBP approved the loan.”

The officials of the town have yet to issue their statements on the protest. INQ