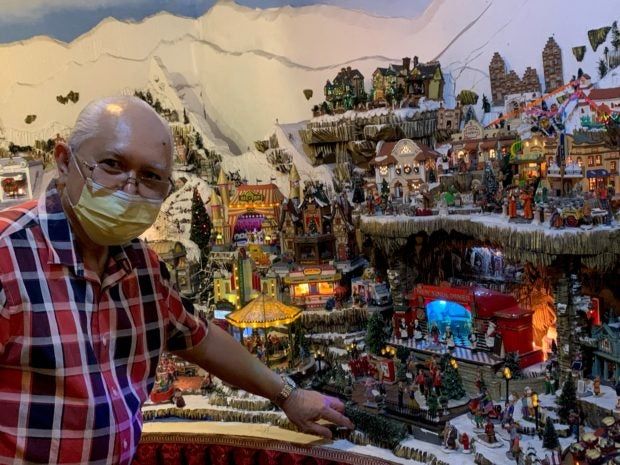 Christmas songs fill the air, merrymakers dance on ice, the trains run, the carnival rides are on the move, and festive lights blink.

It’s that magical time of the year again at the 8-meter by 10-meter room filled with thousands of miniature objects at the ancestral home of Bacolod artist Bamboo Tonogbanua at San Juan Street.

The Village that opened in 1996 has brought joy to thousands of children and adults, but as the COVID-19 pandemic raged last year, Tonogbanua closed it to the public.

This year, the Village that has undergone its annual design upgrades, will be open only to close acquaintances of Tonogbanua.

He said the downgrade of Bacolod’s COVID-19 status to Alert Level 2 offers hope that when it is safe, he could open his Village to the public again.

As a boy, Tonogbanua said he was fascinated by the pictures of festive snow-covered villages and Santa Claus on Christmas cards that led him to start collecting miniature houses, churches, and festive objects. 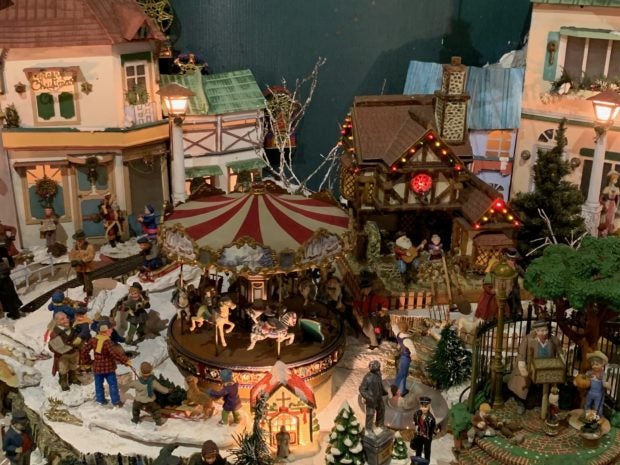 Twenty-five years ago, he began his miniature Christmas Village on a single table, and as he saw the joy it brought to people who visited, it grew bigger each year. He bought more miniature objects during his travels, while friends and even strangers brought in their contributions.

The miniature objects have been artistically laid out in sub-villages representing different countries and eras, with busy urban centers and quaint villages on mountains and hills, along riverbanks and railroad tracks, and even hanging from the sky.

There is also a magical world where characters from famous fairy tales abound in castles, carriages, and snow-capped peaks.

Anyone who visits the Christmas Village is also brought to Paris and its iconic Eiffel Tower, Amsterdam’s canal houses, Sound of Music scenes in Austria, a sleeping rickshaw driver on a bench in Chinatown, mariachi bands, and dancing señoritas in front of taco restaurants in Mexico, the land of the Pharaohs, Charles Dickens’ fictional characters of the Victorian era, and America in the 1950s.

To remind one and all of the reason Mankind celebrates Christmas, various versions of the nativity scene that tell the story of Jesus’ humble birth abound in the Village.

Read Next
Sorsogon dispatches ‘sea ambulance’ to aid residents in coastal areas during vax drive
EDITORS' PICK
Gear up and get ready to play with Yamaha Mio Gear
If elected VP, Sara Duterte will push for mandatory military service for all Filipinos
Over 3 Million worth of prizes to be won at Smart Padala’s SENDali Manalo Promo!
Acer starts the year off strong with the Aspire Vero National Geographic Edition
Senate bill seeks to penalize employers requiring employees to work during rest hours
Marcos-era elections: Not what his son signed up for
MOST READ
Vice mayor slams Vico Sotto for turning Pasig into a ‘puro palabas’ city
Jose Manalo’s son Benj pays tribute to late mother: ‘You’re a testimony of God’s love’
‘Sampal sa gobyerno:’ Drilon wants unvaxxed PAO chief barred from working
Bongbong-Sara tandem names 7 candidates in initial senatorial slate
Don't miss out on the latest news and information.