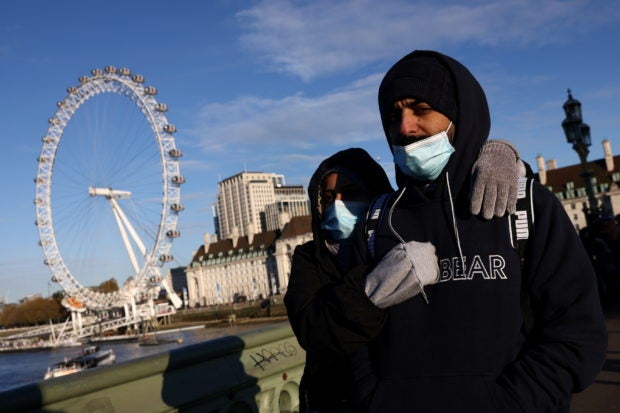 LONDON — Britain is set to unveil new guidance on extending the rollout of COVID-19 booster shots to the under-40s on Monday in light of the rapid rise in cases of the variant of concern Omicron, which the government expects to spread further.

Prime Minister Boris Johnson has restricted travel to southern Africa, tightened testing rules and made mask-wearing compulsory in shops and on transport in response to Omicron.

He also asked the Joint Committee on Vaccination and Immunization to urgently review boosters for under-40s, as well as look at reducing the gap between second doses and boosters.

“I don’t think it’s been formally delivered but we’d expect that within the coming hours.”

Ministers also want to ramp up the offer of booster jabs, saying even if vaccines prove to be less effective against Omicron, they should still offer better protection against it and reduce the number of hospitalizations and deaths.

The UK Health Security Agency on Sunday said it had identified a third confirmed case of Omicron, which scientists say has about double the number of mutations to the spike protein as the currently dominant Delta variant.

“I would expect that to rise. We don’t know by what speed or by what numbers, so therefore what we’re doing is trying to slow it down. But we can’t stop it,” Argar said.

“We’re trying to give ourselves the time to understand how it works and how it interacts with the vaccine.”

Prime Minister Johnson said the restrictions would be reviewed in three weeks. Asked if the rules could be tightened before then, Argar said, “it’s not something I’m anticipating.”