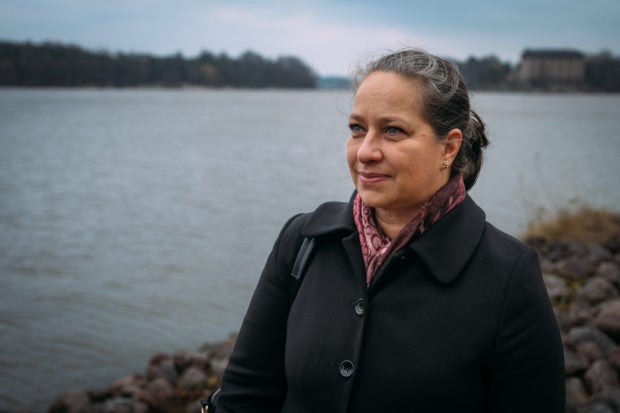 HELSINKI — At home in the Finnish capital, Ilona Taimela scrolls through hundreds of WhatsApp chats with her former pupils –- pictures of animals, maths sums and simple sentences in English and Finnish.
The teacher last year gave lessons to Finnish children imprisoned some 3,000 kilometers (1,800 miles) away in Syria’s Al-Hol displacement camp — using only the messaging app.
Al-Hol is a sprawling tent city housing around 60,000 people, mainly women and children displaced by the US-backed battle to expel the Islamic State group from war-torn Syria.
Among them are thousands of children of foreign mothers who travelled to Syria to be the wives of IS jihadists.
“Some of the children didn’t know what a building is, what a house is, because they’ve always been in a tent,” Taimela told AFP.
“There was so much that they needed to learn.”
Rights observers warn the camp’s children are under constant threat from violence, poor sanitation and fires.
“It’s a miserable place, it’s out of control,” said Jussi Tanner, Finland’s special envoy charged with ensuring the fundamental rights of the Finnish children in Al-Hol, including access to healthcare and schooling, and eventual repatriation.
Extremist propaganda “is free to roam with no counter-messaging,” he said.
Tanner had the idea of offering lessons by phone to Al-Hol’s Finnish children when schoolchildren everywhere moved to distance learning at the start of the coronavirus pandemic.
With the help of Finland’s Lifelong Learning Foundation, officials engaged Taimela, a specialist in teaching Finnish kids abroad, and another teacher, to design and teach a curriculum.

‘What’s the weather there?’

With phones banned in the camp, the lessons would have to be in secret, and the politically sensitive project was also to be kept hidden from the Finnish public.
Tanner forwarded details about the voluntary classes to the mothers.
“That same day… we got maybe eight children,” Taimela said.
Soon 23 of around 35 Finnish children in the camp had signed up.
“Good morning! Today is Thursday May 7, 2020. The first day of distance school!”
Taimela’s first message to the children included a smiling selfie.
“The sun is shining here in Finland. What kind of weather is it there?”
Soon Taimela and her colleague were exchanging hundreds of text and voice messages a day with the children, who were taught one or two subjects a day.
“The little ones would always get Finnish, and the older ones would get geography or history, and some of them also wanted to learn English.”
Sending photos used too much data, so the teachers relied on emojis, but soon realised there were no symbols for mathematical fractions or the ubiquitous Finnish blueberry.
“During the year the blueberry [emoji] arrived, so we were happy,” Taimela says, laughing.
Despite only knowing scant details about the children, Taimela said she and her colleague were “worried all the time about their welfare.”
“Especially when we heard that they were sick, or there was a storm and the tent had collapsed.”
Communication with some families would periodically stop.
“Some of them escaped the camp,” special envoy Jussi Tanner says, “so they were actually taking part in the school while on the run in northwestern Syria in an active conflict zone.”
Others were suddenly repatriated and left the group for good.
After months of lessons, the mother of one six-year-old revealed her daughter could now read.
“Not all six-year-olds in Finland can do that,” Taimela says, smiling. “It was a eureka moment.”

‘Proud of what we did’

IS fighters declared a “caliphate” in large parts of Syria and neighboring Iraq in 2014, three years into Syria’s civil war.
Taimela says she feels “sadness rather than anger” towards the mothers who led their children into the conflict.
Many were vulnerable and believed the promises of jihadists that they would live in some “kind of paradise”.
But several military offensives whittled away at the brutal IS proto-state, until in 2019 Syrian Kurdish forces declared it defeated.
Reluctant Western nations have since brought home handfuls of their IS-linked nationals, mostly children.
Taimela had accepted that she would never know what happened to the repatriated children she had taught, but one day she was called to a reception centre in Finland.
“It was an emotional few hours” meeting some of her pupils face to face for the first time, she said.
They “came very close” and Taimela read to them.
“I just wanted to know, ‘How is everything, what can I help with?’,” she said.
Finland’s foreign ministry has now repatriated 23 children and seven adults.
Tanner told AFP that only around 15 “harder-to-reach” individuals, of whom 10 are children, remain in camps in Syria.
The issue originally proved divisive in Finland, but opposition has “become much more muted”.
Taimela’s teaching drew to a natural close in mid-2021 and the ministry later made the project public.
She is now looking at how to use the innovative teaching model in other crisis zones or camps, and has received requests regarding Greece, Myanmar and Colombia.
“The Al-Hol teacher, that’s my label now,” Taimela smiles.
“But I’m proud of what we did.”
RELATED STORIES
WATCH: Syrian children most vulnerable in refugee camps
Syrian refugees and the OFWs’ mandatory repatriation
ADVERTISEMENT
FEATURED STORIES
NEWSINFO
Vice mayor slams Vico Sotto for turning Pasig into a ‘puro palabas’ city
NEWSINFO
Imelda Marcos trends on Twitter after octogenarian jailed for allegedly stealing mangoes
NEWSINFO
‘Sampal sa gobyerno:’ Drilon wants unvaxxed PAO chief barred from working