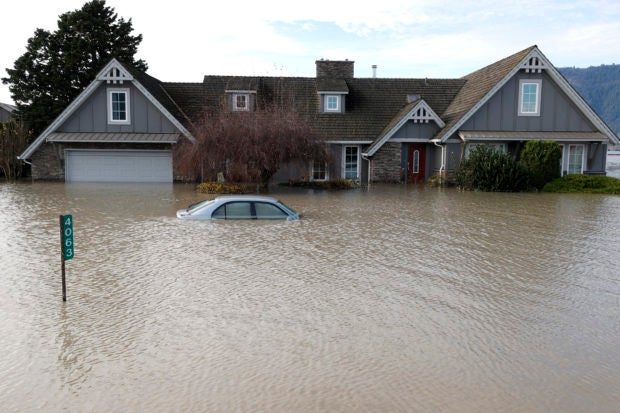 OTTAWA — Canada’s westernmost province British Columbia is bracing for another downpour that officials said Sunday could be as bad or worse than a torrent that caused major flooding and deadly mudslides two weeks ago.
“We’re in the middle of one of the most intense series of storms that we have seen along coastal B.C.,” British Columbia Public Safety Minister Mike Farnworth told a briefing.
The next storm to hit the Pacific region, expected late Monday to Wednesday, he said, “could be the most intense since the original storm pulse hit two weeks ago.”
The minister said the situation is “volatile” and warned residents to prepare for more evacuation orders, possible increased flooding and closed highways.
British Columbia was hit by record rainfall in mid-November that caused widespread flooding and mudslides. The extreme weather damaged and destroyed roads and bridges, forced thousands to evacuate their homes and left at least four dead and one missing.
Prime Minister Justin Trudeau visited affected areas on Friday, after deploying the military to help with sandbagging.
“Extreme weather events are going to become more frequent,” he warned.
This weekend has so far seen up to 130 millimeters (five inches) of rain dumped on parts of British Columbia, plus 30 millimeters of snow melt adding to runoff in already swelled rivers.
Localized flooding has been reported in communities near Vancouver, officials said, while minor landslides once again struck several highways into the city, leaving behind rocks, trees and other debris.
Ted White of the River Forecast Centre said, “A potentially potent atmospheric river is developing in the Pacific Ocean… (that has) the potential of being an extreme storm” when it makes landfall.
ADVERTISEMENT
FEATURED STORIES
NEWSINFO
Duterte claims he kicked an undersecretary in the face due to corruption
NEWSINFO
19th Congress to replace ‘Bayanihan’ laws with ‘BBM’ stimulus bill, defer barangay polls
NEWSINFO
Comelec task force endorses report of fishy bank withdrawals to AMLC