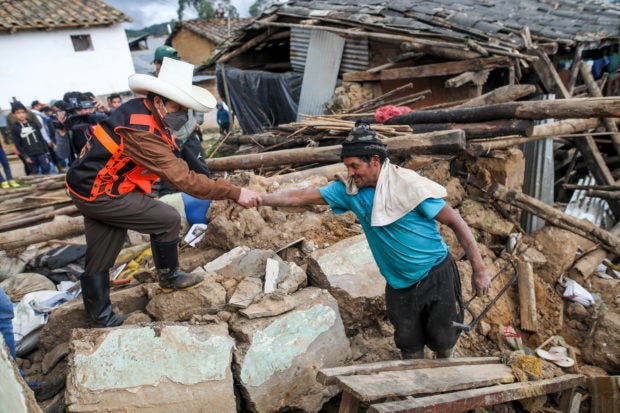 Peru’s President Pedro Castillo shakes hands with a man affected by a quake in Jalca Grande, in the Amazonas region, Peru, November 28, 2021. REUTERS

A 7.5 magnitude earthquake shook the remote Amazon region of northern Peru on Sunday and was felt as far as Lima in the center of the country, destroying 75 homes but with no deaths reported.

The seismological center of the Geophysical Institute of Peru (IGP) said the earthquake had a depth of 131 kilometers (81 miles) and that the epicenter was 98 kilometers from the town of Santa Maria de Nieva in the province of Condorcanqui.

The quake was felt throughout central and northern Peru. Some residents left their homes as a precaution, according to local radio and television reports.

No damage was reported to the 1,100-kilometer oil pipeline of state-owned Petroperu that crosses the Peruvian Amazon region to the Pacific coast in the north.

The National Institute of Civil Defense (Indeci) said in a statement that 220 homes were affected, 81 uninhabitable and 75 destroyed. Seven places of religious worship and two shopping centers were among damaged facilities, Indeci said, adding that four residents were injured.

President Pedro Castillo said through Twitter that he ordered the immediate deployment of support personnel and took a trip in a military plane to the area.

“We will support those affected and address material damage,” he said.

Walter Culqui, mayor of the town of Jalca Grande in Chachapoyas province, said several houses had been damaged, leaving three non-serious injuries. Part of the church tower in the area collapsed, he said.

Through social networks, electricity cuts were reported in several locations in jungle areas. Local TV images showed stretches of roads blocked by huge rocks and dirt that had been knocked loose.

The U.S. warning system said there was no tsunami warning after the earthquake.