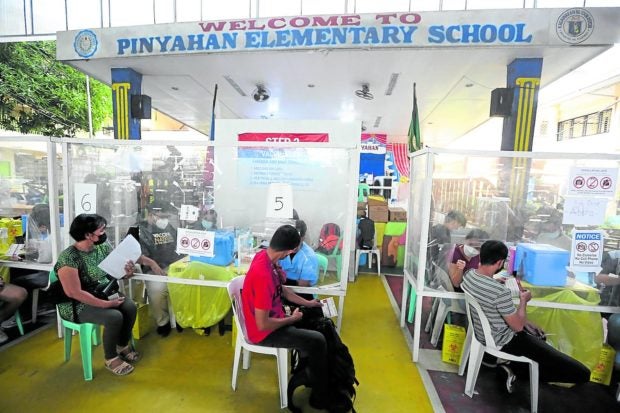 FIRST SHOT Some Quezon City residents get their first dose of AstraZeneca vaccine at Pinyahan Elementary School in Barangay Pinyahan on Sunday, a day ahead of the start of the National COVID-19 Vaccination Days.
—NIÑO JESUS ORBETA

Speaking in an online forum of the Presidential Communications Operations Office, Galvez said the three-day campaign was now targeting a “realistic” 9 million recipients, down from the earlier target of 15 million.

He said the target was adjusted because the daily vaccination rate, although averaging at a million daily, had “plateaued” in recent weeks. He said the country already achieved a record 21 million shots administered this month.

“We are confident that our ‘Bayanihan Bakunahan’ [vaccination drive] will be successful in capacitating our local government units so that they can bring up their vaccination output before the holiday season,” he said.

Galvez said there would be a second mass vaccination drive from Dec. 15 to Dec. 17.

He said the Nov. 29 to Dec. 1 vaccination days aimed to bring to 60 to 70 percent the total number of eligible Filipinos who have received at least one dose.

Galvez also said the government had been preparing for 11,000 vaccination centers but was now eyeing around 8,000, although according to him, many of these were “mega vaccination sites” that could accommodate more recipients.

The private sector contributed 507 vaccination centers, including 118 coming from private schools and institutions, he said.

President Duterte is expected to visit a vaccination center outside Metro Manila also on Monday.

The local government of Manila will open 75 vaccination sites for the three-day event.

A total of 44 district health centers will serve as vaccination sites for residents and nonresidents under the A1 to A5 categories.

The six district hospitals will give first and second doses of Pfizer for the pediatric group.

The hospitals will also have the first dose of all brands for the A1 to A5 categories and booster shots for A1, A2 and A3 groups.

First and second doses of Pfizer for the pediatric population as well as the first dose of all brands for A1 to A5 categories will be available in these malls.The local government reminded the vaccine recipients to register and present the QR code, which is available at manilacovid19vaccine.ph for verification purposes.

The Department of the Interior and Local Government (DILG) warned local chief executives against infusing politics in the three-day national inoculation drive.

In a radio interview on Sunday, Jonathan Malaya, spokesperson for the DILG, said local officials who would use the event in partisan political activity would be issued show cause orders.

“Our vaccination sites cannot be used for any partisan political purpose so it’s prohibited to put up tarpaulins with politicians’ names. They are also not allowed to round up supporters and bring them in groups [to the vaccination sites],” he said.

He said that apart from show cause orders to defiant local officials, they could also be charged for violating health and safety protocols for their roundup of supporters.

To address a shortage in manpower despite the mobilization of all material and human resources for the national vaccination days, he said that contact tracers would be tapped to help out as additional vaccinators and data encoders.

Malaya said that contact tracers no longer had that many people to trace due to the dwindling number of new COVID-19 cases.