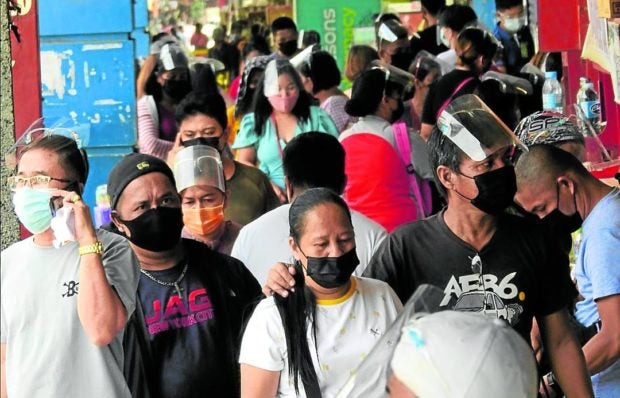 BUSY AGAIN People have been returning to San Pedro Street in Davao City since September, mindful of health protocols as restrictions are eased in the city. —BING GONZALES

DAVAO CITY, Davao del Sur, Philippines — After registering a surge in June, the number of new coronavirus cases in the city has gone down to a single-digit level, with practically no recent infections in most of its 182 barangays.

Except for the two late reported deaths due to COVID-19, the city posted zero virus-related deaths as of Nov. 27, according to the report of the Davao Center for Health Development (DCHD) of the Department of Health (DOH) in the Davao Region.

The DCHD only monitored seven new COVID-19 cases from Davao City, which contributed to the 33 new cases in the entire region as of Sunday.

Dr. Michelle Schlosser, spokesperson of the Davao COVID-19 Task Force, said the COVID-19 cases in the city, including the new ones, were noted only in 46 of the 182 barangays in the city.

“Many of our barangays registered zero COVID-19 cases. For how many days now since Nov. 14, we no longer have high risk areas in the city and we don’t have establishments on lockdown,” she said over Davao City Disaster Radio.

She said they had a constant dialogue with establishment owners when Davao City suffered a surge in June and July this year, and they have been diligently following guidelines and protocols against COVID-19.

Malls in the city, however, were filling up with people and several taxi drivers are seen taking off their face masks as the city government began easing restrictions last week.

Schlosser reminded the public to continue observing the minimum public health protocols and advised parents against bringing their unvaccinated children to crowded places, like malls, beaches or parks, as COVID-19 was still very much around.

As infections declined, the demand for intensive care unit (ICU) beds and isolation facilities also eased up in the city.

Of the 294 total COVID-19 ward beds at Southern Philippines Medical Center, the top COVID-19 referral facility in Mindanao, only 132 are used. Only 32 of its 71 ICU beds are occupied and of its 97 isolation beds, only 25 are used. Only 21 of its 55 mechanical ventilators were being used, the DOH reported.

For the whole region, 56 percent of ICU bed capacity remained available while 71 percent of isolation beds and 74 percent of COVID-19 beds were unused.

Many towns in Central Luzon were also slowly being cleared of COVID-19 infections as local governments ramp up vaccinations.

Tarlac province registered no new cases on Thursday and Saturday, the provincial government disclosed in its latest bulletin.

Not a single new case was recorded in the capital Tarlac City and its 17 towns, as the province’s active cases remained at 109.

To date, 133,324 residents in the province have been fully vaccinated out of 212,232 who received their jabs. Zambales needs to inoculate 70 percent of its 649,615 population to achieve herd immunity.

Aurora province also had no new COVID-19 cases and only had 14 active infections as of Friday. At least 69,333 residents, or 43 percent of Aurora’s 160,889 target population, have been fully vaccinated while 31,066 residents have received their initial dose, local health records showed.

In Ilocos Norte province, the towns of Dumalneg, Adams, Carasi, Solsona, Nueva Era, Marcos, Pinili, Badoc and Currimao maintained zero COVID-19 cases out of its 23 towns and cities as of Saturday. The province has 54 active COVID-19 cases, with six new infections added to the tally on Saturday.