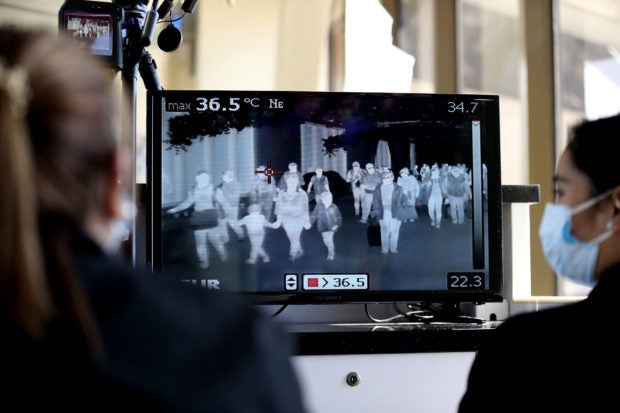 This file photo, taken in January 2020, shows passengers arriving at Ninoy Aquino International Airport being monitored for fever using a thermal scanner. This was two months before the COVID-1`9 pandemic reached the Philippines. (File photo by RICHARD A. REYES / Philippine Daily Inquirer)

Co said the travel ban on seven African nations won’t be enough to keep away the new SARS-CoV-2 variant of concern named Omicron by the World Health Organization (WHO).

The WHO cited it as the cause of a high number of mutations and the rise in COVID-19 infections in South Africa. (See related stories on Page A3 and in World, Page A13)

The government has announced the temporary suspension of flights from South Africa, Namibia, Zimbabwe, Lesotho, Eswatini, Botswana, and Mozambique.

Cabinet Secretary and acting presidential spokesperson Karlo Nograles on Saturday said the suspension would take effect immediately and would be in place until Dec. 15.

“This is to clarify that the Inter-Agency Task Force’s temporary suspension of inbound international flights from South Africa, Namibia, and Zimbabwe contained in IATF Resolution 150, supersedes the earlier Green List classification of the three abovementioned countries in IATF Resolution 148-A,” Nograles said.

The Inter-Agency Task Force on the Management of Emerging Infectious Diseases (IATF), which made the decision to suspend the flights, cited local cases, or the likelihood of cases caused by the Omicron variant in those countries.

South Africa, Namibia, and Zimbabwe were previously included in the “green list” of countries with a low risk of COVID-19 transmission. Botswana, Lesotho, Eswatini, and Mozambique were on the “yellow list.” The IATF is expected to update this list by next month.

In a statement, Co said the travel restrictions should also cover Hong Kong and Israel, where the new variant was reported to have caused infections.

The travel ban and quarantines of passengers and airline crew from South Africa, Hong Kong and Israel should make “no exceptions, not even for returning Filipinos whether overseas Filipino workers, ‘balikbayans’ and travelers for business and tourism,” she said.

Co urged the IATF and airline companies to “please act fast to stop the spread of the latest highly infectious variant.”

She pointed out that COVID-19 variants were able to enter the country in the past “because of our defective and poor border controls because we allow returning Filipinos to pass through our border controls.”

“If the IATF fails all of us, then it is up to the airlines, governors, and mayors to protect the Filipino people with the right border controls against the new variant,” Co said.

The WHO on Friday reminded individuals to take measures to reduce their risk of getting COVID-19, including proven public health and social measures, such as wearing well-fitting masks, hand hygiene, physical distancing, improving the ventilation of indoor spaces, avoiding crowded spaces, and getting vaccinated.

Not if, but when

An official of the Department of Health (DOH) said there were ongoing discussions on possibly expanding the list of countries covered by travel restrictions because of the new variant.

At the Laging Handa briefing on Saturday, Dr. Beverly Ho of the DOH Public Health Services Team said the new list could be expected “in the next few hours or days.”

The decision will be based on data being gathered from various parts of the world where the Omicron variant may have been detected, she said.

Although the first response to the threat is border control, Ho said it would be impossible to close the country’s borders forever, and like the Delta variant, “it’s not a matter of if it will enter, but when.”

“With the studies that are being conducted, we’re also hoping that it won’t be as fierce as the Delta variant. We’re also hoping that our vaccines and minimum public health standards will really help protect us and make us much better and much more equipped when this variant reaches us,” she said.

The Delta variant was responsible for the alarming rise in infections in mid-2021 as the government’s COVID-19 vaccination program was picking up speed with a more stable supply of vaccines.

“Information is unfolding by the hour and our team is studying this,” Ho said.

Countries were sharing data that will be used by local health authorities on the next steps to take, she said.

The DOH on Saturday reminded Filipinos not to let their guards down despite the steady improvement in the number of COVID-19 cases in the country. It also urged those who have not yet been vaccinated to get the jab.

Ho said the country was recording lower numbers in recent weeks, but the authorities could not yet declare that the pandemic was contained as the “good” indicators could be reversed in just a few days or weeks, especially if minimum public health standards were disregarded.

The DOH reported that the daily coronavirus infections remained under 1,000 with 899 new infections recorded on Saturday, raising the national caseload to 2,831,177.

It also said that the positivity rate—or the proportion of individuals found positive for the virus among 37,224 tested—was 2.4 percent, below 5 percent for 15 days straight.

The WHO says a positivity rate of under 5 percent should be kept for two weeks—the maximum incubation period for the virus—before the transmission of COVID-19 could be considered contained.

The DOH, however, has yet to say if it was ready to make such a declaration as the country was able to meet that qualification.

Health Secretary Francisco Duque III had earlier said that they would seek the WHO’s guidance before issuing any pronouncement.

Of the total recorded cases, only 0.6 percent (17,052) were considered active cases. Nearly 60 percent of them have mild or no symptoms.